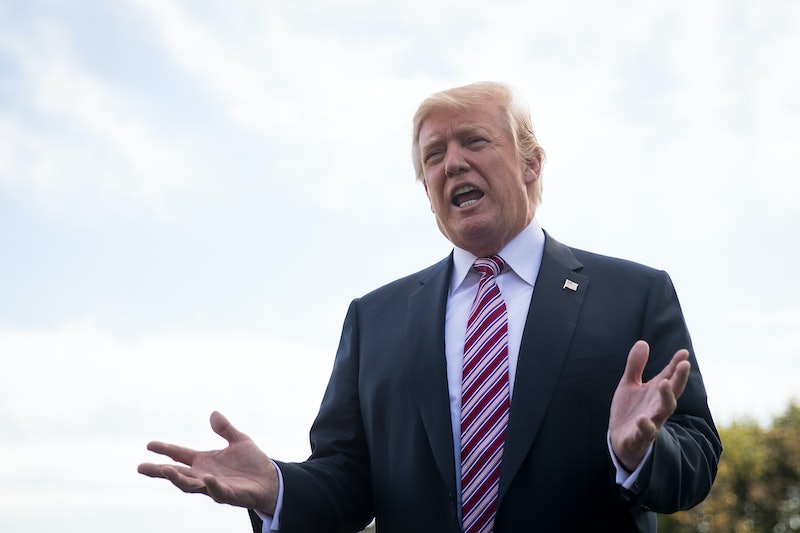 The New York Times reported in 2018 that managers at President Trump's New Jersey golf course knowingly employed undocumented immigrants as employees, and took steps to help them evade detection. Now, the Times is reporting that Trump's Bedminister golf club has fired its undocumented workers, with the Trump Organization "quietly scrambling" to bring its properties into compliance with U.S. immigration law. Bustle has reached out to the Trump Organization for comment.

The Times reported on Dec. 6 that Trump's New Jersey golf club was employing several undocumented immigrants, who went on the record to talk about their experiences. They said that the club's management was aware of their immigration status and helped them avoid being caught by authorities. One of them, Victorina Morales, even said she received a certificate of appreciation from the White House for her service after getting hired at the club using phony immigration documents.

In the subsequent weeks, several more undocumented immigrants employed at the club came forward to say that the management allowed them to continue working despite being aware of their immigration status.

But The Times now reports that, in the month since its initial exposé, the Trump Organization has fired around a dozen undocumented immigrants that were employed at Trump's New Jersey club. The organization is also reviewing its staff at other properties to make sure it isn't employing anyone else who can't legally work in the country, according to The Times.

Also on Thursday, The Times reported that during the 2016 presidential campaign, management at Trump's Bedminster club took steps to prevent undocumented employees from being screened by the Secret Service. Bustle has reached out to the White House and Trump National Golf Club in New Jersey for comment as well.

Emma Torres, who worked in food service at the golf club, told The Times that kitchen staff were asked in 2016 to submit their personal information to the management so that they could be vetted by the Secret Service. Torres says she told a human resources employee at the club that she was undocumented and, as such, didn't want to give her information to the federal government. According to Torres, the human resources employee told her that this was "no problem," and scratched her name off the list of employees to be vetted.

Torres was allowed to remain on staff at the club, she said, and went on to prepare food for Trump and his Secret Service detail when he visited the club (presidential candidates are often afforded Secret Service protection before their elections). Moreover, human resources asked Torres for a list of other workers at the club who she believed to be undocumented; she complied, and all of those employees were allowed to continue working as well.

Ever since launching his political career in 2015, Trump has expressed skepticism of immigration to the United States and an unwavering hostility to undocumented immigrants. As of this writing, the U.S. government is in the midst of a partial shutdown due to the president's refusal to sign a government funding bill that doesn't include money for a U.S.-Mexico border wall.