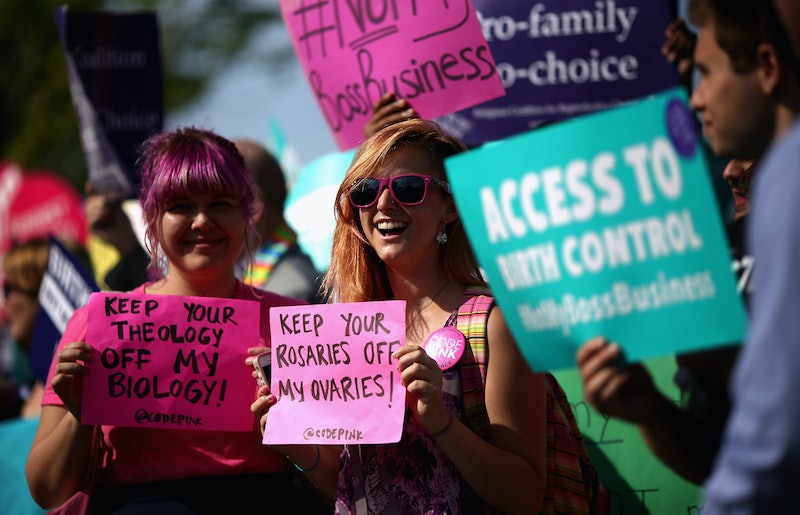 On Sunday, a federal judge in California blocked the Trump administration's birth control rollback from taking effect in 13 states and Washington, D.C. In simple terms, the administration's rollback would have allowed more employers to refuse to provide no-cost birth control to women. Prior to that, the Affordable Care Act contraception mandate only allowed certain religious organizations to opt out of providing the coverage, according to NBC News.

The request for a preliminary injunction against the regulations, which were first announced in October 2017, was sought by California, Connecticut, Delaware, Hawaii, Illinois, Maryland, Minnesota, New York, North Carolina, Rhode Island, Vermont, Virginia and Washington state, as well as Washington, D.C., NBC News reported. Despite granting the injunction, Judge Haywood Gilliam limited its scope to just these states and Washington, D.C., declining to move declare a nationwide injunction, according to USA Today.

California attorney general Xavier Becerra called Sunday's ruling the next step in fighting the Trump administration's agenda. "The law couldn’t be more clear: Employers have no business interfering in women’s healthcare decisions," Becerra said in a statement to USA Today. "Today's court ruling stops another attempt by the Trump Administration to trample on women’s access to basic reproductive care. It's 2019, yet the Trump Administration is still trying to roll back women’s rights."

The Associated Press reported that during a hearing on Friday, Gilliam said a "substantial number" of women could lose contraceptive coverage. Gilliam's order said the new regulations pose "serious questions" about if the rules violate the Affordable Care Act's requirement of employer-provided healthcare with no-cost birth control, according to NBC News.

The Trump administration has tried to pass these regulations twice already, according to BuzzFeed News. The first time was in October 2017, and then again the administration proposed amended rules in November 2018. These amended rules allowed exemptions for "entities that object to services covered by the mandate on the basis of sincerely held religious beliefs," according to a release from the Department of Health and Human Services.

The second rule gave protection to small businesses and nonprofits that oppose the mandate to cover contraception, according to the release. "The religious and moral exemptions provided by these rules also apply to institutions of education, issuers, and individuals," according to the agency. The Departments are not extending the moral exemption to publicly traded businesses, or either exemption to government entities."

The injunction was celebrated by progressive groups. The American Civil Liberties Union deputy legal director Louise Melling called the decision "a good day," for example. "It is a good day when a court stops this administration from sanctioning discrimination under the guise of religion or morality," Melling said in a statement. "The Trump administration's rules authorized employers and universities to strip women of birth control coverage — a benefit guaranteed to them by law, and meant to advance their health and equality. We applaud the order to enjoin the enforcement of these discriminatory rules."

Planned Parenthood president Dr. Leana Wen said the decision is a time to increase access to contraception. "Today is a good day. Because of this injunction, women in 13 states can still access birth control under the ACA. Birth control is critical healthcare that helps millions lead the lives they want," Wen tweeted on Sunday. "We should be finding ways to increase access, not limit it."