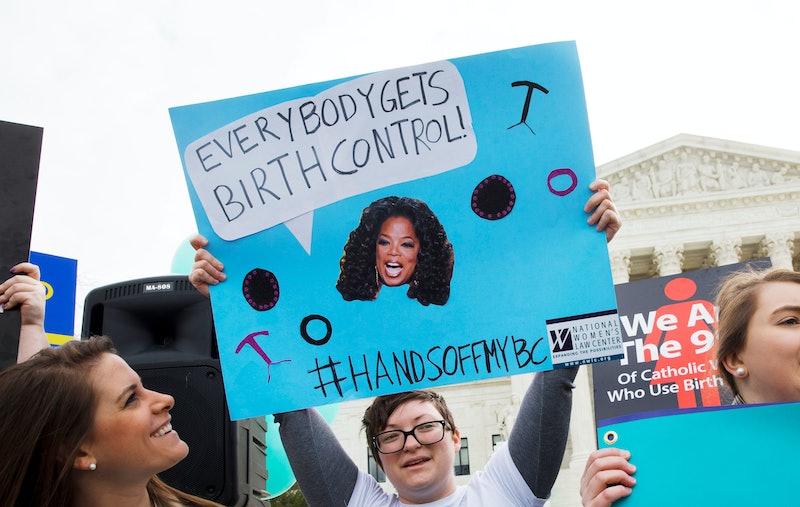 Less than a day after it went into effect, a federal judge blocked Trump's birth control rules nationwide. The block extends a partial injunction from another judge that went into place Sunday night, which prevented the rule from going into place in 13 states that are involved in a lawsuit against it, according to Politico.

Trump's rule would essentially allow employers to deny their employees birth control coverage on the basis of religious or moral objection. The nationwide injunction that will prevent that rule from being implemented was issued by Judge Wendy Beetlestone on Monday afternoon.

“This is a win for women across our country — as a doctor, I cannot believe that we are still debating birth control in 2019, something that nine in 10 women will use in our lifetimes," Dr. Leana Wen president of Planned Parenthood Federation of America, said in a statement following the court's decision. She added, "It’s time that politicians recognize birth control as health care and that women, in consultation with doctors, decide what contraception we receive — not our employers."

In attempting to offer potential coverage exceptions and exemptions to employers, the Trump administration was yet again looking to roll back an Affordable Care Act (ACA) requirement which says that health insurance plans must offer comprehensive birth control coverage. The birth control coverage rule has been in place since 2012, and dictates that all FDA-approved forms of contraception must be included, according to The Washington Post.

"Decisions about birth control are for women and their families to make—not their employers," tweeted Massachusetts Attorney General Maura Healey. "That was our argument and the court agreed. We led a coalition to support @PAAttorneyGen in this fight and now women everywhere can celebrate this victory."

“No American should be forced to violate his or her own conscience in order to abide by the laws and regulations governing our healthcare system,” Department of Health and Human Services spokesperson Caitlin Oakley said in a statement, according to the Post. “The final rules affirm the Trump Administration’s commitment to upholding the freedoms afforded all Americans under our Constitution.”

The partial and full injunctions are the product of two separate lawsuits challenging the Trump administration's attempt to implement the exception rule. Beetlestone argued in her Monday ruling that states stood to be harmed by the rule because they would be forced to shoulder the cost of birth control services when women who lost coverage turned to state-funded programs, NPR reports.

On both Sunday and Monday, the attorneys general involved in both lawsuits took to Twitter to celebrate their victories.

"It’s 2019, yet the Trump Administration is still trying to roll back women’s rights," California Attorney General Xavier Becerra tweeted after Sunday's partial injunction was put in place. "Our coalition will continue to fight to ensure women have access to the reproductive healthcare they are guaranteed under the law!"

Although it is unlikely that the battle to protect ACA-related birth control coverage is over, Monday and Sunday both marked significant victories for its advocates. For now, the ACA birth control mandate remains intact.