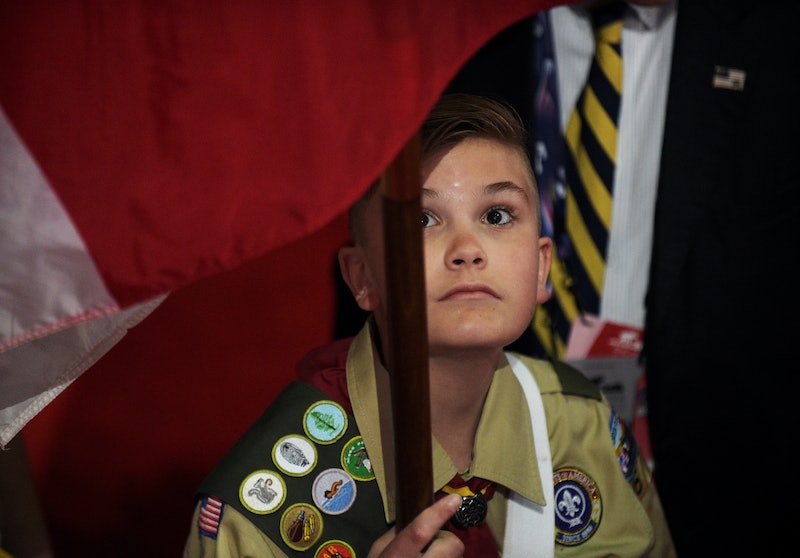 On Monday evening, President Donald Trump gave a speech at the Boy Scouts of America's (BSA) National Jamboree. The speech has attracted much attention because, rather than using the platform to deliver an apolitical, presidential message, Trump's words seemed to mimic those invoked at a political rally. Engaging in partisan political discussion was not only disturbing and inappropriate for his audience, but also may have broken BSA's rules against participation in political events.

The Boy Scouts of America's 2017 National Jamboree is being held in West Virginia. According to a BSA statement, the organization regularly invites sitting presidents to speak at the event and, indeed, seven of the last 11 presidents have done so. However, Trump's speech took a notably different tone from some of his predecessors.

Speaking to a crowd of around 35,000 people, many of whom were children, Trump made many divisive and uncomfortable comments about various topics, despite opening the speech by saying he was not going to speak about politics. Most notably, Trump, perhaps jokingly, threatened to fire Health and Human Services Secretary Tom Price when Price appeared on stage, saying to the audience, "Hopefully he's going to get the votes tomorrow to start our path toward killing this horrible thing known as Obamacare that's really hurting us ... [if not] I'll say, Tom, you're fired." Trump also told Price at the event that, "You'd better get Sen. Capito [a West Virginia Senator who has indicated she will not vote to repeal Obamacare without a replacement] to vote for it."

In addition to his partisan comments about health care votes, Trump also chastised former president Barack Obama for never having attended a Boy Scout Jamboree in person. He also touted his electoral victory again, calling Nov. 8 a "famous night" and noting that he believed it was much more challenging to win an Electoral College victory (which he did) than to secure the popular vote (which his opponent, Hillary Clinton, did). Trump also called the media "fake news" twice during his speech as well as referred to the press as "these dishonest people."

Trump's comments were absolutely inappropriate for the setting. As sitting president at an apolitical event for children, he should have used his platform to praise and encourage the Boy Scouts as well as to serve as a symbol of national unity, not perpetuate divisiveness. Using the evening to boast about his electoral victory, lambast a former president, and erroneously characterize the press as "fake" and "dishonest," is disturbing, un-presidential, and downright dangerous considering the nature of the messages being sent to young children by their president.

Moreover, Trump's commentary about what he believes are the perils of Obamacare and the need to secure votes for its repeal were also wholly unacceptable at an event for a non-political organization whose members cannot even vote in elections. Indeed, Trump's comments may have even caused the organization to violate its own rules against political participation since the president appeared to turn the event into somewhat of a political rally.

The Boy Scouts have a very strict policy that states that members cannot appear to endorse a political platform while in uniform, saying that members must "not be in a conspicuous location where attendees or viewers could construe their presence as an endorsement or symbol of support." While Trump is the president and the role of president is not inherently attached to one political party, his words at the Jamboree certainly came across as highly partisan and, indeed, put the Boy Scouts in the uncomfortable position of having their presence at the Jamboree possibly interpreted as an endorsement of the Republican party platform. A political endorsement is something which would absolutely violate the group's rules.

Indeed, Trump's speech appeared to make BSA uncomfortable enough that the organization was inclined to release a statement following the event, saying that the Scouts did not endorse Trump or a particular "position, product, service, political candidate or philosophy."

Overall, Trump's speech was a disservice to the Boy Scouts and to the United States. He squandered an opportunity for unity and instead used it to inappropriately perpetuate political divisions, something which goes against everything for which the Boy Scouts stand.