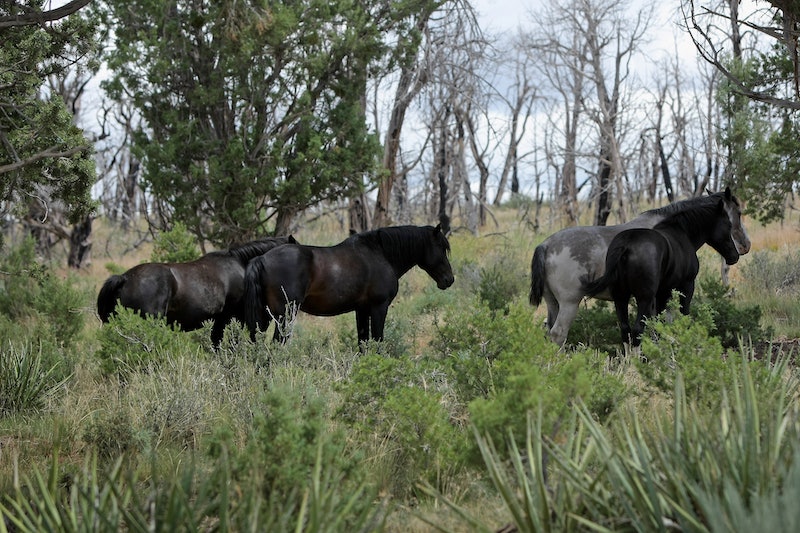 Earlier this week, the White House sent President Trump's first budget proposal for fiscal year 2018 to Congress. At the time, the Trump administration assured Americans that funding would still go where it is needed. But now, it seems there's at least one population who will miss out on life-saving funds. Trump's budget would reportedly make horses vulnerable to slaughter.

Speaking to the media on Tuesday, shortly after the budget was submitted, White House Budget Director Mick Mulvaney took a reassuring stance on the spending proposal. "We are not kicking anybody off of any program who really needs it," he said.

One program that does stand to lose funding, though, is a policy that protects an estimated 59,000 wild horses roaming America's west. According to the Associated Press, Trump's budget proposal cuts $10 million by allowing wild horses to be sold for slaughter. More specifically, the budget removes the requirement that wild horses can't be sold for slaughter, meaning that horses can become vulnerable to foreign slaughterhouses. The move is likely an attempt to save money, but the resulting cost may be too high for some nature advocates, as some critics have reportedly accused Trump of giving in to powerful lobbyists.

Speaking to the AP, Laura Leigh, the president of the nonprofit Wild Horse Education, said, "This is simply a way to placate a very well-funded and vocal livestock lobby."

According to The Humane Society of the United States, wild horses have been protected under U.S. law since 2004. At that time, it became illegal for wild horses to be sold for slaughter. Likely as a result of the protection, wild horse populations have been growing across the vast public lands in the western part of the country. As National Geographic reported earlier this year, the public lands they live on aren't enough to sustain them. As they search for more land to occupy, wild horses — also called mustangs — encroach on the private lands of ranchers and farmers around them.

Although the president's budget recommends removing protection for wild horses in the next fiscal year, that protection may remain up for debate in Congress. At the beginning of May, the Humane Society was "pleased" that Congress's 2017 omnibus spending bill prevented the sale of mustangs for slaughter. Now that the Trump administration has submitted its plan for next year, the issue will be back on the table.

A decrease in government spending could improve the national debt, but in the grand scheme of Trump's multi-trillion dollar budget proposal, $10 million seems like a drop in the bucket. According to USA Today, Trump's budget proposes cutting $3.6 trillion in federal spending over the next 10 years. Depending on how the budget makes its way through Congress, wild horses may not fare well through those cuts.