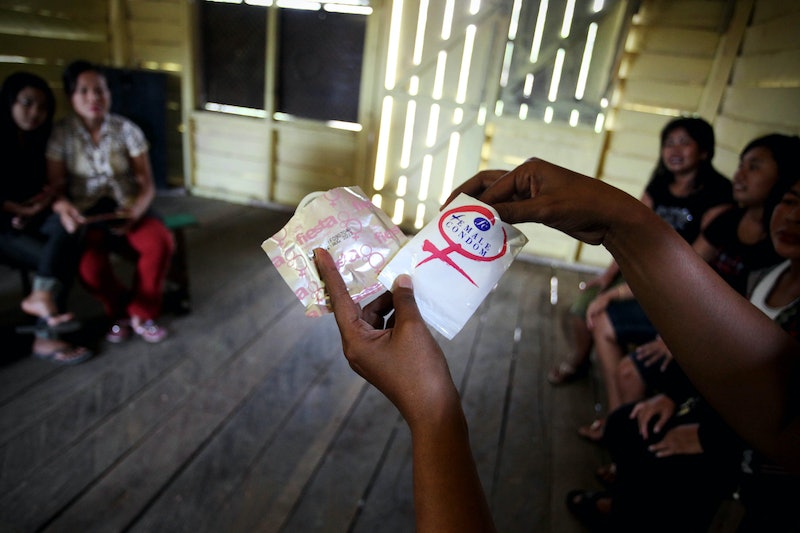 Adding to the plentiful criticism of his controversial 2018 proposed budget, President Donald Trump's proposed budget also allots millions to abstinence-only education programs — $227 million to be exact. While it's unfortunately not an unheard of move for a Republican administration to support these sort of programs, investing in education policies that seek to shame and discourage sexual activity rather than providing information that allows young people to protect themselves remains deeply unsettling and insulting.

As concluded by countless studies over the last 25 years alone, these sorts of programs — which vehemently oppose promoting or even mentioning forms of contraception while discouraging all sexual contact "until marriage" — are considered aggressively ineffective. Research also shows that the states that rely on "wait until marriage" philosophies and policies actually have higher rates of teen pregnancy and sexually transmitted diseases. And it makes complete sense when you consider the fact that they're straight-up refusing to tell young people about the tools available to prevent those things. But, more anecdotally, students who encountered these programs (and the few stray parents who sit in on lessons) report that the culture of shame surrounding sex adds yet another layer of insult to the injury of state-sanctioned ignorance.

As they tend to tie one's virginity (a social construct, at best) with their virtue, much has been written on horror stories of misinformation and terribly offensive analogies presented in abstinence-only classrooms. Armed with claims that a person having sex outside of marriage is like a piece of chewed gum, used tape, or a cup of spit, these lessons generally operate in a way that put the burden of sexual gate-keeping on women, promising that non-married sex is an inexcusable evil while refusing to address the realities of contraceptives, reproductive choice, or even consent.

With nearly 95 percent of Americans engaging in that sweet, sweet premarital sex on the reg, arguments claiming that having sex out of wedlock makes a person lesser remain fundamentally flawed. However, that still hasn't stopped the steady flow of federal funding to these programs.

In an analysis of the history of "abstinence only until marriage" programs, the Sexuality Information and Education Council of the United States unpacked the decidedly unsexy history of funding these kinds of programs dating back to the Reagan administration.

Despite what they call "an overwhelming body of research proving [the programs] are ineffective," SIECUS offered some staggering numbers that indicate that this proposed funding isn't anything new:

Funding for these unproven programs grew exponentially from 1996 until 2006, particularly during the years of the George W. Bush Administration. The funding leveled out between 2006 and 2009 and then reduced significantly in 2010. Between 1996 and federal Fiscal Year 2010, Congress funneled a total of over one-and-a-half billion tax-payer dollars into abstinence-only-until-marriage programs and the funding continues today.

Just the same, if we continue to repeat a history of denying education and resources to young people about their bodies, we're never going to tackle any of the major issues in American sex education.