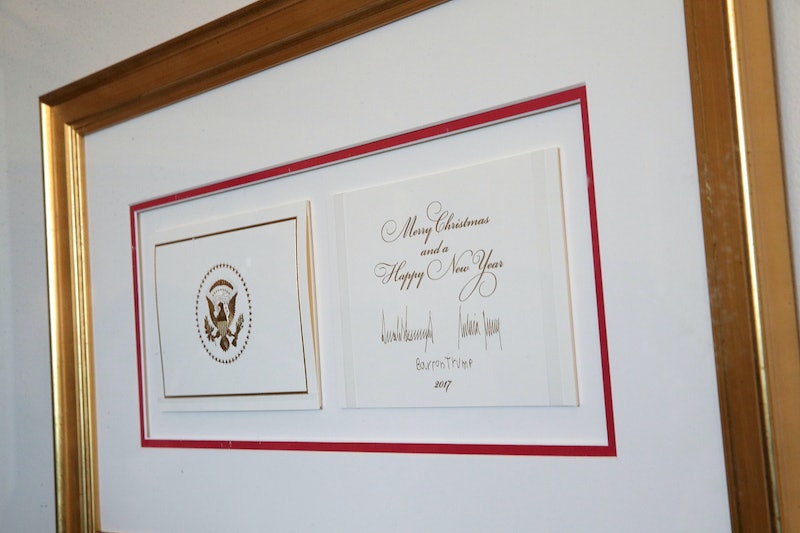 There may not be an outright war on Christmas, but there certainly seems to be different schools of thought in the United States of America on what exactly one ought to wish people during the festive holidays. This year president Donald Trump ditched "Happy Holidays" for "Merry Christmas" while celebrating the season at the White House. In a card signed by Trump and First Lady Melania Trump, the presidential holiday card reads, "Merry Christmas and Happy New Year."

The president has been vocal about the subject of seasonal greetings and has expressed sentiment in favor of specifically saying "Merry Christmas" over the general "Happy Holidays." In October, Trump spoke at the Values Voter Summit in Washington, D.C., and lamented, "They don't use the word 'Christmas' because it's not politically correct."

Trump also vowed, "We are stopping cold the attacks on Judeo-Christian values. You know, we're getting near that beautiful Christmas season that people don't talk about anymore." He went on to say, "You go to department stores, and they'll say, 'Happy New Year' and they'll say other things. And it will be red, they'll have it painted, but they don't say it. Well, guess what? We're saying 'Merry Christmas' again."

When it comes to greetings, Christmas seems to be one of the focal and contentious subjects in American culture wars. During former President Barack Obama's administration, the seasonal greetings were given a more secular shape. In 2009, a New York Times' piece titled "The Spotlight's Bright Glare" reported that then-White House Social Secretary Desirée Rogers had reportedly described the Obamas' plan for a "non-religious Christmas."

"We want it to be inclusive, diverse, representative of all Americans, celebratory, authentic," Rogers had said. The report had been confirmed by a White House official that former administration was indeed aiming for an inclusive seasonal celebration. In a country where a 2015 Pew Research Center study says 92 percent celebrate the holiday, the move to say "Happy Holidays" was an affront to some people.

Obama wasn't the only president to have used "Happy Holidays" as the presidency's main expression during the holiday season. In 2005, former president George W. Bush also sent holiday cards during his administration which read happy "holiday season" as opposed to "Merry Christmas."

Some were unhappy with Bush's decision, including William Donohue, head of the Catholic League for Religious and Civil Rights. In 2005, Donohue told The Washington Post that the lack of "Merry Christmas" on the cards "clearly demonstrates that the Bush administration has suffered a loss of will and that they have capitulated to the worst elements in our culture." But the Bush administration, similar to Obama's presidency, explained that they had wanted to include people of all religious expressions. Press secretary for Laura Bush, Susan Whitson, said that the "cards in recent years have included best wishes for a holiday season, rather than Christmas wishes, because they are sent to people of all faiths."

For the current presidency, the Merry Christmas versus Happy Holidays debate isn't a new one. At least, not for Trump himself. In January 2016, while speaking to an audience at the Liberty University in Virginia, Trump broached the subject and said that politically correct culture was supposedly out of control. "We can all be politically correct. It takes too much time. It takes too much time. And a lot of it is just wrong. I'll give you an example," Trump said. "You go into a department store. When was the last time you saw 'Merry Christmas?' You don't see it anymore. They want to be politically correct."

Studies, however, show that a sizable amount of Americans don't feel particularly strong about the subject. According to a 2012 Pew Research Center study, 46 percent of Americans expressed indifference to how they were greeted during holiday season while 42 percent said they wanted to hear "Merry Christmas." But from the looks of the current administration, it's clear that season greetings are still very much a political issue.