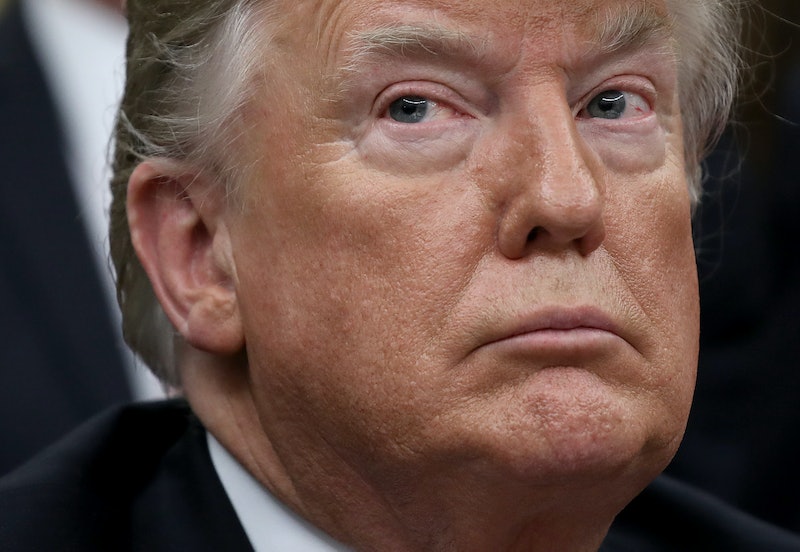 As he made his very first trip to an active war zone alongside the first lady, President Donald Trump incorrectly claimed military service members got a raise because of him for the first time in over a decade. Trump made the false assertion at the Al Asad air base in Iraq on Wednesday during a surprise visit.

This much is false, though. According to the Defense Department, the military has actually had a consistent annual increase in salary since at least 2007. Additionally, the military has never received a 10 percent hike in wages at once, as the president claimed to have insisted on giving them. Bustle has reached out to the White House for a comment.

Still, it won't be the first time that Trump made such an assertion without backing it up. In May, during a White House celebration for military families, Trump made a similar claim.

As mentioned before, Trump isn't a stranger to making such broad and eyebrow-raising assertions sans proof. With the celebration of military spouses and children, Trump said in May, "My administration is totally committed to every family that serves in the United States Armed Forces."

"I was proud to sign that big pay raise that I've already spoken about," the president added at the time. "And I am proud of it. And I guess there will be others, too. Would you like one sooner, or do you want to wait another 10 years? I don't know." Then during a speech in front of Naval Academy graduates, Trump repeated a similar falsehood.

At the time, just like now, some people pointed out that the president had it wrong and should be careful with making such claims.

His commentary on military pay grades and non-existent 10 percent wage-hikes aside, Trump also expressed his worry for wife Melania Trump's safety during the trip to Iraq.

"I had concerns for the first lady, I will tell you," Trump told the press. "But if you would have see what we had to go through in the darkened plane with all window closed with no light anywhere. Pitch black. I’ve been on many airplanes. All types and shapes and sizes ... So did I have a concern? Yes, I had a concern."

In light of everything, Trump might have to add another concern to the list: either clarifying or correcting what he said during his visit.