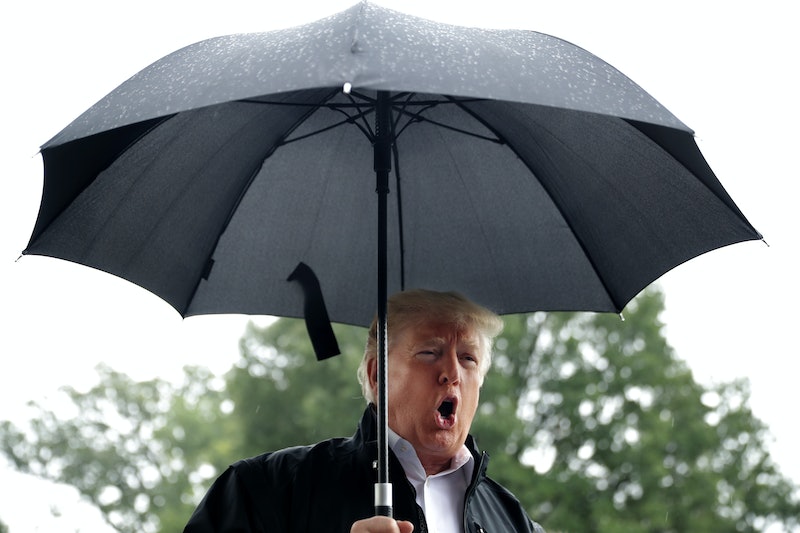 Despite the overwhelming scientific consensus that human-caused climate change is real, dangerous, and possible for humans to slow, the topic remains divisive in American politics. President Donald Trump is a great example of that. Trump's views on climate change have certainly evolved — but according to what he said about it on CBS' 60 Minutes on Sunday, they still haven't come in line with the scientific consensus on the subject.

Back in 2012, Trump famously claimed that "the concept of global warming was created by and for the Chinese in order to make U.S. manufacturing non-competitive" in a tweet." On Sunday, then, CBS interviewer Lesley Stahl asked Trump if he still believed that climate change was a hoax — and he revealed that his views had changed.

“Look, I think something’s happening, something’s changing, and it’ll change back again," Trump said. “I don’t think it’s a hoax. I think there’s probably a difference. But I don’t know that it’s manmade."

This goes in the face of overwhelming scientific evidence to the contrary, which even Trump's own agencies attest to. NASA, for example, confirmed that 97 percent of active climate scientists agree that the climate is changing, and that the change is "extremely likely" to be happening because of human actions.

Trump is not a climate scientist, so his views would not have been included in the study that proved that consensus. However, he does act as the top executive of what The New York Times called "the biggest carbon polluter in history" — the U.S., that is — so his views on climate change do matter. And according to what he told Stahl on Sunday, it doesn't look likely that he's inclined to do anything to fight back against a threat that a recent U.N. report called "one of the major challenges of our time," which "adds considerable stress to our societies and to the environment."

The report, according to The New York Times, insists that coal burning should not be a part of the global energy strategy going forward if there is to be any chance of slowing climate change and mitigating its effects — and this is likely what Trump was referring to when he said he didn't want to "lose millions and millions of jobs." Trump has placed himself squarely behind the coal industry, but Bloomberg reported that it's still declining despite his efforts — and that job losses in that sector are likely to happen, no matter what Trump does or doesn't do.

Trump's statement also implies that a switch away from fossil fuels would necessarily create massive job loss, but that's also factually incorrect. Jobs in the clean energy sector have been multiplying across the world, according to Forbes, and the 2018 U.S. Energy and Employment Report even showed clean energy is actually the single most important factor driving job growth in the American energy sector.

To sum things up, climate change is real. It is a threat. Humans did cause it — and are continuing to worsen its effects. Humans, however, could also work to slow it down and protect the planet for future generations — despite what Trump claims.