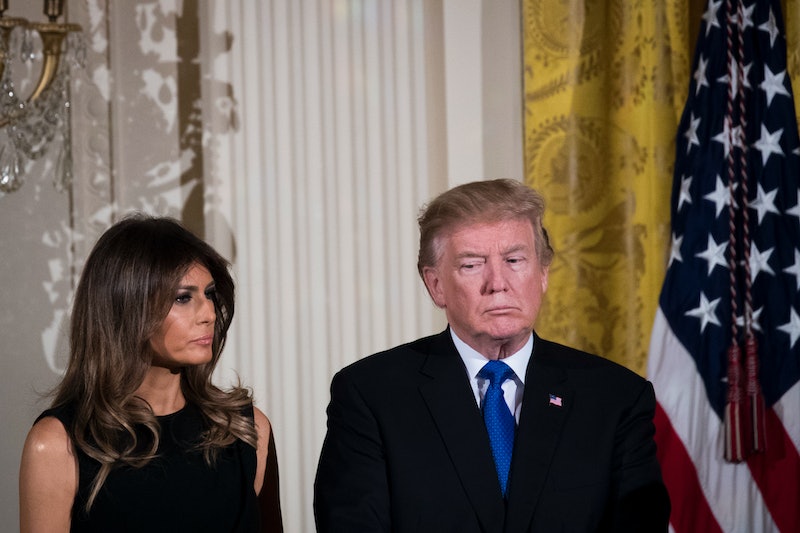 It's been more than a year since you first heard Trump say "Grab 'em by the pussy," and you probably figured you'd lost the capacity to be shocked by anything Trump said about women. Surprise: In Michael Wolff's book Fire and Fury, released to the public in the midst of legal wrangling Friday morning, Wolff presents a new wave of painfully sexist claims. Among other things, according to Fire and Fury, Trump called Sally Yates a "c*nt," regularly tried to sexually proposition his friends' wives, and chose to work with women who tolerated his misogyny. (Trump decried Wolff's book as "full of lies, misrepresentations and sources that don’t exist" in a tweet Thursday night.)

In a series of television interviews that aired Friday morning, Wolff swore blind that the book was an accurate representation of Trump's White House. "I am certainly and absolutely, in every way, comfortable with everything I've reported in this book," he told Today co-anchor Savannah Guthrie.

Meanwhile, over on Fox and Friends, Trump's camp scrambled to convince the public that Wolff is wrong. "More and more people are starting to see that his facts just simply don't add up," Press Secretary Sarah Huckabee Sanders told the network's hosts via video chat Friday morning. On CNN, Deputy Press Secretary Hogan Gidley went even further: "This author is quite frankly a crackpot fake news fantasy fiction writer."

It's no surprise that the White House is in a frenzy: Wolff's book paints Trump as an unstable misogynist, to say the least. Without further ado, here are some of the most horrifying comments Trump made about the women around him, according to Fire and Fury:

Later that day, Sally Yates and former director of National Intelligence James Clapper appeared before the Senate Judiciary Committee’s Crime and Terrorism subcommittee—and were greeted by a series of furious tweets from the president. ... To Trump, he was just up against Sally Yates, who was, he steamed, “such a cunt.”

Lest we forget, Yates is the former deputy attorney general who oversaw the Justice Department when Trump took office. She agreed to remain in the position as a holdover until Trump could find her replacement — that is, until Trump tried to push a travel ban that blocked individuals from a handful of Muslim-majority countries from entering the States.

Yates publicly declared her opposition to Trump's travel ban, calling it unconstitutional and advising the Justice Department not to defend it. She was immediately fired.

Later, Yates was invited to formally testify as part of Congress' examination into Russian collusion in the presidential election. Although the White House sought to block her from doing so, Yates went on to make a series of damaging claims about her time in Trump's White House.

Which leads me to the offending quote:

To Trump, he was just up against Sally Yates, who was, he steamed, “such a cunt.”

I probably don't have to explain why this descriptor is both inane and painfully sexist.

Hitting On His Friends' Wives

Trump liked to say that one of the things that made life worth living was getting your friends’ wives into bed. In pursuing a friend’s wife, he would try to persuade the wife that her husband was perhaps not what she thought. Then he’d have his secretary ask the friend into his office; once the friend arrived, Trump would engage in what was, for him, more or less constant sexual banter. Do you still like having sex with your wife? How often? You must have had a better fuck than your wife? Tell me about it. I have girls coming in from Los Angeles at three o’clock. We can go upstairs and have a great time. I promise … And all the while, Trump would have his friend’s wife on the speakerphone, listening in.

Wolff uses this as an example of how Trump, like Bill Clinton before him, "even among world-class womanizers and harassers... seemed exceptionally free of doubt or hesitation."

Let's break this down. Here, Wolff is claiming that Trump tries to seduce his friends' wives, and that's just the tip of the iceberg. To do this, Wolff claims, Trump aims to break down the trust of their marriage by convincing the wife she can do better, and then double-crossing his friend by encouraging him to insult his wife — with the friend's wife on speakerphone.

Again, this is a comment that speaks for itself.

While nobody would ever say Trump was sensitive when it came to women, he had many views about how to get along with them, including a theory he discussed with friends about how the more years between an older man and a younger woman, the less the younger woman took an older man’s cheating personally.

In other words: According to Wolff, Trump told several people that the best way to not be held accountable for your actions was to commit yourself to somebody of a different generation.

On Why We Need Women In The Workplace

Trump is no common-or-garden misogynist, according to Wolff. Instead, he believes in the importance of women being represented in the workplace. His reasoning is probably a little different from yours, however.

While Trump was in most ways a conventional misogynist, in the workplace he was much closer to women than to men. The former he confided in, the latter he held at arm’s length. He liked and needed his office wives, and he trusted them with his most important personal issues. Women, according to Trump, were simply more loyal and trustworthy than men. Men might be more forceful and competent, but they were also more likely to have their own agendas. Women, by their nature, or Trump’s version of their nature, were more likely to focus their purpose on a man. A man like Trump.

Trump wanted women in the workplace, according to Wolff, not because he believes in equal opportunity, or equal pay, or anything with the term "equal." Instead, he wanted women around him because, in his own mind, he was the center of their universe, and they would treat him as such.

On Hiring Women Who Could Brush Off Misogyny

A couple of pages later:

Women, he explained to one friend with something like self-awareness, generally got this more precisely than men. In particular, women who self-selected themselves as tolerant of or oblivious to or amused by or steeled against his casual misogyny and constant sexual subtext—which was somehow, incongruously and often jarringly, matched with paternal regard—got this.

Amazingly, Trump seems married to the goals of a feminist workplace without any feminist reasoning, Wolff reports. In fact, Trump's logic is purely anti-feminist: Women are more used to being harassed and maligned, and therefore more able to handle his behavior with panache.

On The Critical Need For Attractive Women In Television

While hunting for a White House press secretary — a job later taken, and then lost by, Sean Spicer — Trump insisted on one key criteria for the new hire, according to Wolff:

In the early days of the transition, with Conway out of the running for the press secretary job, Trump became determined to find a “star.” The conservative radio host Laura Ingraham, who had spoken at the convention, was on the list, as was Ann Coulter. Fox Business’s Maria Bartiromo was also under consideration. (This was television, the president-elect said, and it ought to be a good-looking woman.)

Coulter has said publicly that she doesn't believe women should be able to vote. That, apparently, is less important as job criteria as whether the person is conventionally attractive.