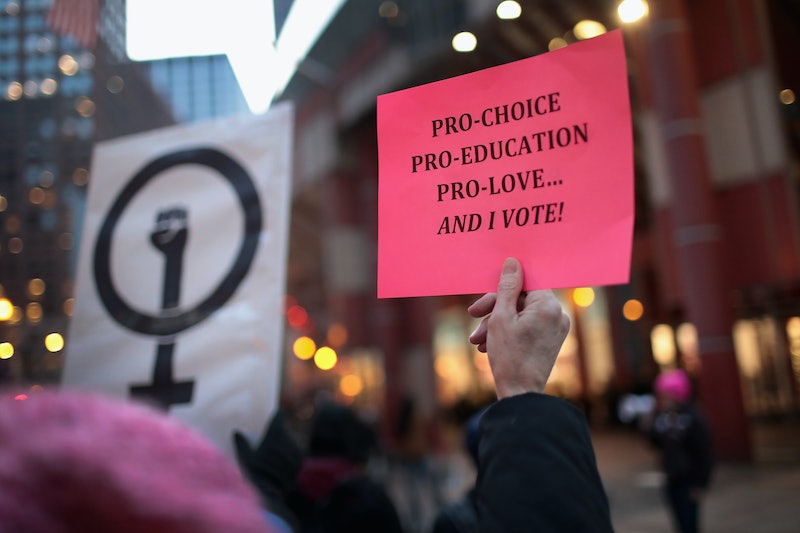 The White House, according to a report from The New York Times, wants to find the middle ground with Planned Parenthood. But the White House's proposed deal is anything but a step in the right direction. President Trump's conditional support for Planned Parenthood is extremely manipulative. In this case, he's trying to manipulate a woman's legal right to abortion, and that's pretty scary.

According to the New York Times, the White House proposed that it won't slash federal funding for Planned Parenthood as long as it stops providing abortions.

This isn't the first time Trump has brought up such a proposal. In February 2016, while speaking on the subjects of abortion and health care during a Republican debate, Trump said, "I would defund [Planned Parenthood] because of the abortion factor, which they say is 3 percent. I don't know what percentage it is." A year before that, Trump told Fox News' Sean Hannity, "Maybe unless they stop with the abortions, we don’t do the funding for the stuff that we want."

Planned Parenthood President Cecile Richards promptly issued her response on the matter, promising to never "back down in the face of threats or intimidation."

In a statement, Richards said, "The White House proposal that Planned Parenthood stop providing abortion is the same demand opponents of women’s health have been pushing for decades."

Such a proposal implies that the support the federal government offers to Planned Parenthood is subject to revocation at any given moment. It looks less like support and more like manipulation targeting some of society's most vulnerable women, as Planned Parenthood's provides help for women often living below the federal poverty line who don't have health insurance. The organization aids new mothers, people with disabilities, and children, along with countless other women from all backgrounds. Support for these women should be unconditional, constant, and robust.

The most glaring irony about such a pronouncement from the White House is how it perpetuates the very same misogyny Planned Parenthood actively works against; Planned Parenthood has worked tirelessly in supporting and promoting women's unconditional autonomy and the right to safe abortions without bowing down to governmental interference. The organization has toiled to provide safe options for women disenfranchised by a lack of social mobility and economic conditions.

A legal right should never be subject to conditional support. The White House's offer is manipulative, and Planned Parenthood is right for rejecting it.