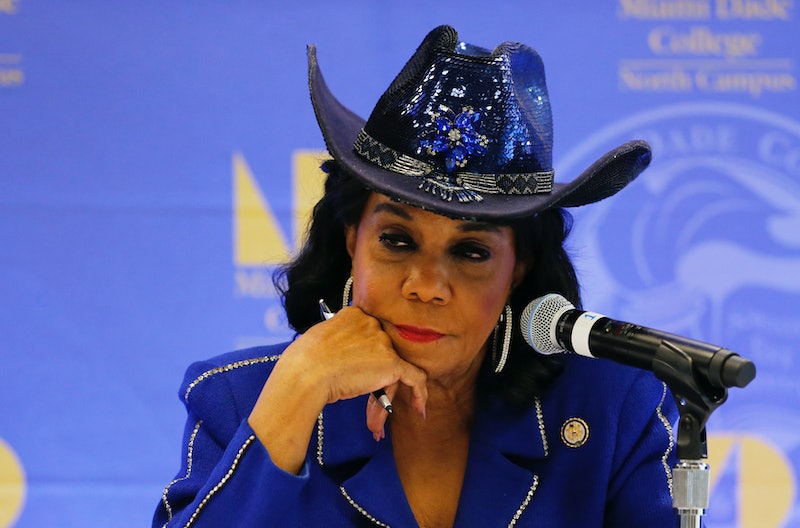 The tension between President Trump and Democratic congresswoman Frederica Wilson continued Sunday morning, when the president tweeted his latest nickname for a political foe. Trump called Wilson "wacky" and a "gift" for the Republican party in a tweet sent just after 8 a.m. EST on Sunday. Trump and Wilson have sparred back and forth since Wilson accused Trump last week of making insensitive comments to the widow of a U.S. Army soldier killed in Niger earlier this month.

"Wacky Congresswoman Wilson is the gift that keeps on giving for the Republican Party, a disaster for [Democrats]," Trump tweeted on Sunday. "You watch her in action and vote [Republican]."

Trump's tweet likely referred to next year's midterm elections. As a member of the House of Representatives, Wilson will be up for re-election in 2018. She won election to the House in 2010, and currently represents Florida's 24th congressional district, in a northern section of the Miami metro area. The region Wilson represents is known as a Democratic stronghold in the Sunshine State, but Trump's tweet seems to predict otherwise. (Bustle has reached out to Rep. Wilson's office for comment.)

Now dubbed "wacky" by the president, Wilson joins a rag-tag club of foes who have received unflattering nicknames at the hands of Trump. If "Lyin' Ted Cruz" is any example, though, perhaps Trump will eventually drop the nickname and focus his attention elsewhere.

The feud between Trump and Wilson began last week, after Wilson spoke out about a phone conversation she reportedly heard between the president and Myeshia Johnson, the widow of Sgt. La David Johnson. Johnson, a member of an Army Special Forces unit, was one of four U.S. Army soldiers killed in Niger at the beginning of October. According to Wilson, Trump told Myeshia, who is pregnant with the couple's third child, "He knew what he was signing up for, but I guess it hurts anyway."

Wilson had reportedly been riding in a limousine with Myeshia at the time of the phone call. The congresswoman later told The Washington Post about the impact that Trump's words had on the widow. "He made her cry," she said.

For his part, Trump has denied the allegations from Wilson. In a tweet on Thursday, Trump called Wilson's account of the phone call "a total lie." He also seemed to criticize her for listening in on the "very personal call."

Throughout Trump's attempts to discredit her, Wilson has stood by her version of the story. In a statement last week, Wilson turned her focus to the circumstances of the attack that killed Johnson and three other soldiers.

The loved ones Sgt. Johnson leaves behind are my constituents and my job now is to do all that I can to help them heal. I'll save the bully pulpit for the necessary task of uncovering the circumstances surrounding the ambush and working to help ensure that our soldiers have all of the resources and support that they need while putting their lives on the line to keep others safe.

According to The New York Times, the Pentagon has opened an investigation into the attack. American and Nigerian soldiers reportedly have given conflicting testimony about whether or not the attack was an ambush. It's not entirely clear what the soldiers' mission was, but according to Wilson's statement last week, the unit was charged with training and assisting West African security forces that are facing militant groups like Boko Haram.

But the name-calling may not be one-way only — Wilson reportedly called the president a "jerk" and a "liar," according to POLITICO. Still, the congresswoman doesn't seem keen on letting Trump change her version of the facts.