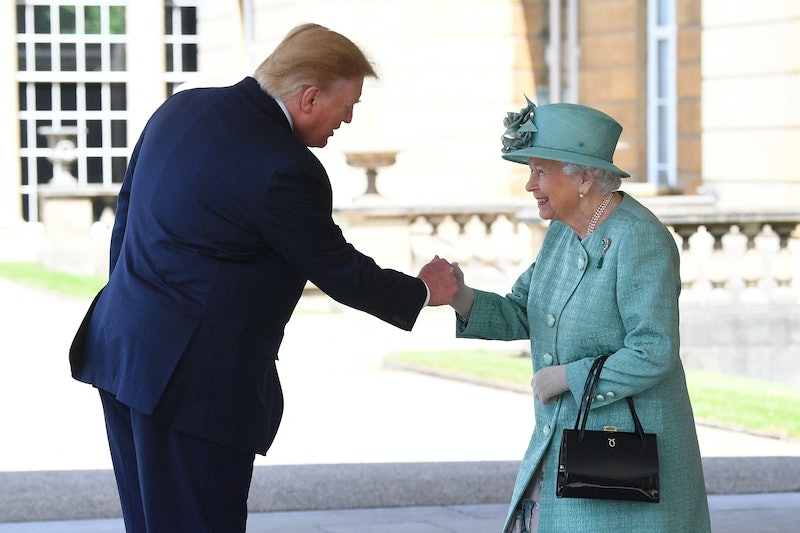 Donald Trump is currently in the U.K. on an official state visit after being invited by Queen Elizabeth. And because she's the Queen, this visit will involve a huge, white-tie banquet dinner that took six months to plan. That there will be a huge dinner is really no surprise, but you might be surprised to hear that, apparently, Queen Elizabeth will inspect the dinner table herself.

The banquet will take place on the evening if Monday, June 3 and, according to CNN, will be attended by 170 guests. These will reportedly include both the queen and Trump, as well as First Lady Melania Trump; first children Ivanka, Donald Jr., and Eric Trump; Prince Charles and wife Camilla, Duchess of Cornwall; and William and Kate, the Duke and Duchess of Cambridge. The official royal family website explains that the other guests are "usually invited on the basis of their cultural, diplomatic or economic links to the country being hosted."

CNN reports that, according to the Press Association, the queen will inspect everything about the dinner, from the flower arrangements to the tablecloths. While it seems like the banquet could probably go on just fine without any inspections from the queen, it is her party. And the people planning it know what they're doing, so she probably won't have too much to add, anyway. It's not like she's going to get there and demand they change out all the salad forks for ones that are a half-centimeter longer. (Well, probably not.)

As for what this massive table setting includes, CNN reports that each guest will have six drinking glasses — one for water, one for a champagne toast, one each for red and white wine, one for a dessert wine, and one for port. Everything is exact, including each place setting being 18 inches apart and all of the chairs being the same distance away from the table.

In addition to the dinner, Trump's state visit will include tea at Clarence House and a visit with Theresa May at 10 Downing Street, as reported by Town & Country.

During the day on Monday, Trump, the queen, and a few others viewed a collection of artifacts from the Royal Collection Trust. This was also attended by Prince Harry, who reportedly won't be attending the dinner. Trump won't be meeting Harry's wife, Meghan Markle, as she's on maternity leave, but she's probably thankful for that. The Sun recently reported that Trump indicated Markle was "nasty" toward him in response to hearing she spoke out against him while he was running for president three years ago. Trump then denied saying this on Twitter. The Sun has released the audio of Trump's interview.

This is not the first time Trump has visited the UK since becoming president. If you recall (based perhaps on a gaffe he had while over there), Trump visited in July 2018 and had tea with the queen. But while he met her, this was not considered a state visit, which is why there was no Queen Elizabeth-inspected banquet at that time.