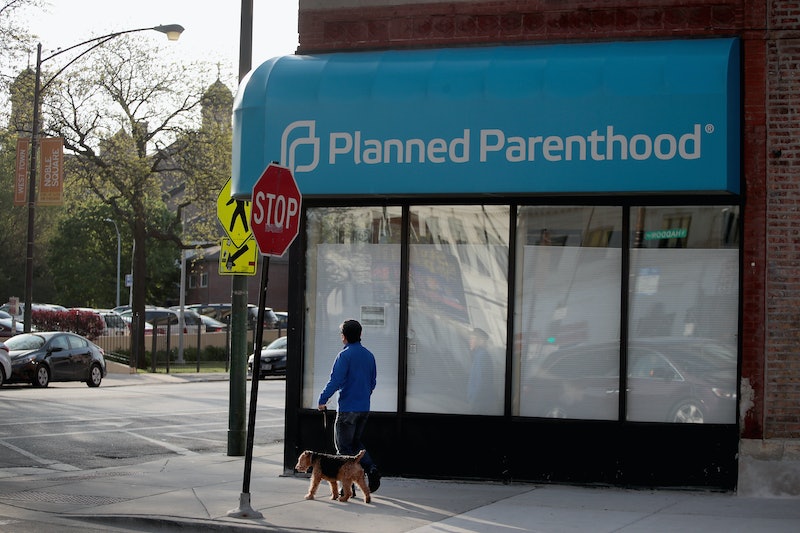 According to Politico, the new rule would redirect tens of millions of federal family planning dollars away from abortion clinics to anti-abortion, faith-based care providers. Republican lawmakers have spent years proposing a complete defunding of Planned Parenthood, and while the Trump administration's new rule wouldn't fully accomplish that, it would require federally funded family planning clinics to implement a “clear physical and financial separation” between federally funded services and abortion care.

"Title X is our nation’s gold-standard family planning program that serves low-income patients for free," Harlow says. "Nobody should be denied access to reproductive health care or receive inadequate care because of their lack of income. We won’t sit back while Trump upends the family planning safety net as part of his anti-woman, anti-poor, and anti-health care agenda.”

According to Politico, the new rule will go into effect 60 days after being published in the federal register — unless it is put on hold by a court injunction. Under the new rule, health care providers will still be able to talk about abortion, Politico reported, but they will not be able to make abortion referrals to their patients. As a result, critics of the Title X changes have expressed concern that health care providers will not be able to sufficiently advise patients on their reproductive health care options.

The negative impact that this new rule will have on reproductive health care access is two-fold, Harlow tells Bustle. Not only will pregnant patients be treated differently under the Title X changes, Harlow says, but also fewer health care providers will be able to continue offering family planning services:

Women who find themselves pregnant will no longer be guaranteed standard neutral counseling about their options, including about the option of abortion. ... And then, because of the extreme level of regulatory burden and added expense that the new rule imposes, many providers will not be able to comply with those rules, nor will they be satisfied with providing substandard counseling, and so this rule will drive many health care organizations from the Title X program, and in that way it will decrease access for people all around the country.

Dr. Leana Wen, the president of Planned Parenthood, made a similar point, telling NPR that the Trump administration's rule change would force Planned Parenthood and other reproductive health care organizations to decline Title X funding. As a result, Wen said, this would make it much more difficult for low-income patients to access abortion and other reproductive health care services.

According to Wen, Planned Parenthood currently serves 41 percent of the four million Title X recipients across the country, and the new rule would be detrimental to their quality and accessibility of reproductive health care — not just abortion. In a statement to Bustle, Guttmacher Institute Senior Policy Manager Kinsey Hasstedt says that the new rule would also disproportionately affect "people with low incomes, adolescents, uninsured individuals, people of color, immigrants, and others who experience systemic barriers to care," noting that Title X has served these communities for decades.

Title X "is a unique program and it was designed by the federal government to provide low-income patients with the same kind of quality care that those who have more economic resources can access," Harlow adds, "and what is so discouraging and harmful about this rule is that the administration is putting all these new burdens and obstacles on low-income patients who have no other options and no other resources."