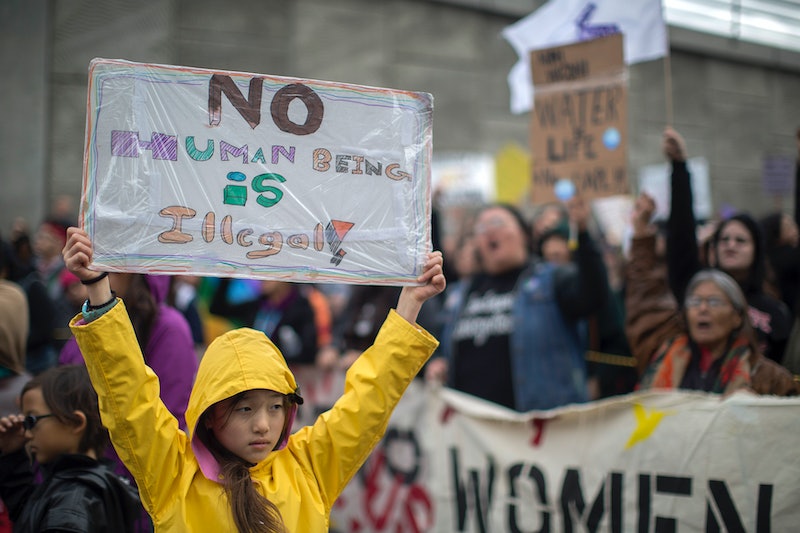 Another high-ranking person has joined the many voices protesting the Trump administration's immigration stance. On Monday, the United Nations High Commissioner for Human Rights described the family separation policy as child abuse and called it a "cruel practice."

In his address to the UN Human Rights Council in Geneva, Zeid Ra’ad Al Hussein spoke about how the Trump administration is separating parents and children who cross the U.S. border without documentation and said, "the thought that any State would seek to deter parents by inflicting such abuse on children is unconscionable."

Al Hussein cited the president of the American Association of Pediatrics, Dr. Colleen Kraft, who told CNN the practice is "government-sanctioned child abuse" that is "creating a whole generation of kids who are traumatized" in his statement.

Al Hussein announced in December that he would not seek to serve a second term as High Commissioner, a decision he says he made because "in the current geopolitical context, [to serve] might involve bending a knee in supplication." Monday's speech was his last regular address to the UN Human Rights Council. Hussein first listed the human rights abuses of a number of familiar autocratic nations, including North Korean, Syria, and Venezuela, before adding the United States to his list for the forced separation of nearly 2,000 children from their families in a six-week period.

The policy of family separation has led to the establishment of a tent city in Tornillo, Texas, which currently houses about 200 children, a Texas representative claimed, with plans to expand. Anecdotes about the process of separating children from their parents have sparked widespread outcry from Democrats and Republicans alike, including the story of a child taken away from her mother while breastfeeding, and parents who were told their children were being taken away to be bathed, but in fact were being separated.

This is not the first time the UN Human Rights Council has spoken up about family separation. On June 5, the office declared the policy a violation of human rights and international law, and urged the US government to put a stop to it. “The U.S. should immediately halt this practice of separating families and stop criminalizing what should at most be an administrative offense," said Ravina Shamdasani, a spokeswoman for Al Hussein's office.

Nikki Haley, the United States ambassador to the UN, responded without specifically addressing the subject of the office's claims, saying, "Once again, the United Nations shows its hypocrisy by calling out the United States while it ignores the reprehensible human rights records of several members of its own Human Rights Council."

She went on to call the High Commissioner's office "ignorant", and added, "Neither the United Nations nor anyone else will dictate how the United States upholds its borders."

Haley's statement emphasized the president's established frustration with and disregard for international organizations, as seen in his decisions to impose tariffs that escalated a trade war with China, pull out from the Paris Agreement, and disband the Iran nuclear deal.

Attorney General Jeff Sessions said he supports the policy of separating family members at the border as a way to deter other potential migrants from illegally crossing the border. Some families who crossed in the last two months were crossing illegally, but others had intended to apply for asylum upon reaching the United States.

Secretary of Homeland Security Kirstjen Nielsen tweeted Sunday that families seeking asylum should be doing so at ports of entry, but Vox reported that some who present themselves for asylum "the right way" are still turned away, and many asylum-seekers still undergo family separation.

Hussein's final address to the UN Human Rights Council was a warning to growing nationalist sentiment around the globe, made all the more notable by his rebuke of the United States, which has long been regarded as a global human rights advocate. His speech, which was met by a standing ovation from the council, warned specifically against the nationalism of "self-serving, callous leaders."

“The more pronounced their sense of self-importance," he said, "the more they glory in nationalism, the more unvarnished is the assault on the overall common good — on universal rights, on universal law and universal institutions, such as this one.”