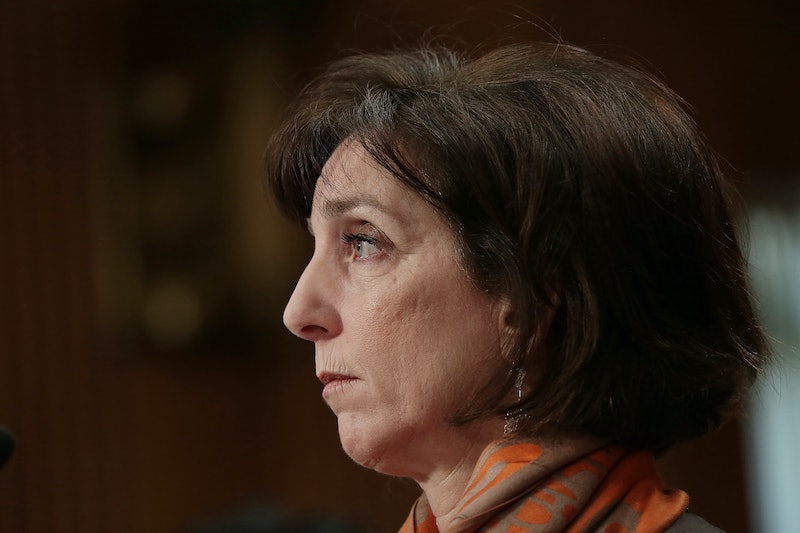 On Saturday, in a scathing new op-ed, Trump's former Mexico ambassador, Roberta Jacobson, detailed what her job was like under the current administration. Honing in on the administration's decision to withdraw from NAFTA, the former diplomat said that a significant lack of communication from the White House and State department sometimes left her high and dry while she was on the ground, attempting to fulfill her duties.

"Some chaos is normal at the start of an administration," Jacobson wrote. "But it has been extreme under Mr. Trump."

Jacobson reflected on her diplomatic career, which spanned over three decades, and which she said required her to visit almost every country in North and South America. Throughout her career, she said, she "relied on guidance from my State Department superiors, and the White House via the National Security Council." However, she said, "Such guidance was rare after Mr. Trump assumed office."

One distressing event that she recounted in the op-ed took place in April 2017, when she said she learned through third-party reports that the Trump administration was planning to withdraw from the North Atlantic Free Trade Agreement (NAFTA). Shortly after learning this, Jacobson said she was on deck to spend an afternoon at the Mexican air show, surrounded by high-profile Mexican officials, including then-President Enrique Peña Nieto. Because of lack of communication from the U.S. government, she said she wasn't prepared to answer inquiries about the Trump administration's decision, but she was expected to respond to them, nonetheless.

At the event, Jacobson wrote, Nieto said it was important that they sit down and talk. "When we finally sat down alone, the president, unfailingly polite, was blunt: What the hell was going on?," Jacobson said he asked of her, describing the proposal to leave NAFTA as "a disaster — economically, politically."

"All I could tell him was that I was continuing to speak with the White House and hoped cooler heads would prevail," Jacobson wrote. "I noted that this was coming just after a spate of negative articles about the first 100 days of the Trump administration."

Her experience was teaching her, she said, "that critical news reports almost inevitably led the president to fall back on his standard refrains: Build the wall, or Nafta is the worst deal ever."

Jacobson's somber op-ed lamented the possibility that the Trump administration's current dealings with Mexico could undo a relationship that has taken years to develop. Given the imperialistic attitude the United States historically donned, she expressed concern that some progress has been undone.

"Over the past three decades, successive American administrations have worked diligently to vanquish the anti-American DNA in Mexico," Jacobson wrote. "We were overcoming the suspicions that a history of invasion, territorial loss and imperial intent had bequeathed. That kind of trust is slow to build, and remarkably easy to destroy. It is being destroyed now."

Jacobson retired from her post back in May, having worked under five different presidents. At the time, she did not explicitly explain why she was leaving, but described the decision as taking place, per Politico, at a "crucial moment."

More like this
Why Eurovision 2023's Host City Won’t Be Revealed For A While Yet
By Sam Ramsden and Rachel Mantock
Are John Legend & Kanye West Still Friends? The Singer’s Latest Update Is Candid
By Brad Witter
13 Photos Of Princess Charlotte Loving The Commonwealth Games
By Sam Rogers
Meghan Markle Gave An Adorable Lilibet Update
By Alice Broster and Sam Ramsden
Get Even More From Bustle — Sign Up For The Newsletter