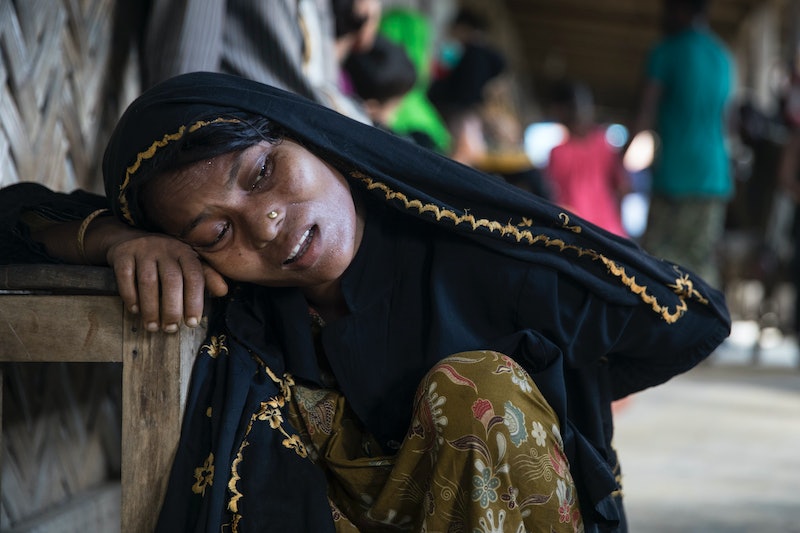 In its six-month review of the Trump administration's expanded global gag rule, the State Department presented a pretty rosy picture of the controversial policy's rollout — but global nonprofits say the agency isn't telling the whole story. In the report, the State Department claimed only four organizations had lost funding due to the policy, which yanks all health assistance funding to nonprofits based overseas that don't agree to completely disavow abortion. Planned Parenthood and other reproductive rights groups, however, argue the global gag rule review is misleading.

"One misleading statistic the State Department has been leaning heavy on is that only four organizations declined to sign on to the global gag rule," Sia adds, in reference to the report's claim that prime partners, or organizations with a direct funding agreement with a U.S. department or agency, declined to sign in only four instances out of 733 awards. "This is an attempt to minimize the impact of the policy."

According to Sia, the review doesn't account for international or local organizations that have yet to decide whether they'll sign on to the expanded global gag rule as their funding contracts haven't come up for renewal. There are roughly 500 U.S. funding grants yet to be subjected to the rule, according to the Associated Press.

Previous versions of the rule – which every Republican president elected since 1985 has implemented — withheld family planning funding from foreign-based organizations that wouldn't disavow any involvement or connection to abortion. But President Donald Trump's expanded rule calls for refusing those organizations all health assistance. That includes funding for malaria and HIV/AIDS programs, nutrition services, as well as maternal, child, or primary care programs. In fact, Trump's expanded global gag rule stands to place restrictions on an estimated $8.8 billion in U.S. foreign aid, according to Human Rights Watch. By contrast, the global gag rules previously implemented by earlier Republican presidents placed restrictions on just roughly $575 million in family planning funds.

The Trump administration refers to its expanded global gag rule as the Protecting Life in Global Health Assistance (PLGHA) policy. But, like many policies, it has taken time to roll out. To its credit, the State Department seems aware it's a bit early in the game to review a policy that hasn't even been fully implemented. "With less than six months of policy implementation, it is too early to assess the full range of benefits and challenges of the PLGHA policy for global health assistance," the report notes. "The picture on progress and challenges is still developing."

But in an email to Bustle, a State Department official maintained the agency's six-month review was "the product of an extensive inter-agency process that solicited input from field offices, embassies and missions, implementing partners, and other interested stakeholders." The official told Bustle another review will be conducted later this year in an effort to "enable a more thorough examination based on more extensive experience."

Still, the organizations who've declined to adhere to the global gag rule are expected to take big hits in funding. International Planned Parenthood Federation (IPPF), for example, could lose $100 million, according to an analysis by the Associated Press. The organization is active in more than 170 countries around the world.

Marie Stopes International, which provides contraception and safe abortion services in 37 countries worldwide, has also said publicly that it won't sign onto the rule. The organization says the policy leaves it with an $80 million funding gap. "Unless the organization can close this funding gap, it estimates that more than 2 million women will no longer have access to contraception services from a trained Marie Stopes International provider, leading to an extra 2.5 million unintended pregnancies, 870,000 unsafe abortions, 6,900 avoidable maternal deaths, and £107 million increase in direct healthcare costs," it said in a statement released late last month.

Sia says analyzing the impact of the expanded rule isn't easy because sub-recipients, which are the organizations that U.S. government agencies don't have a legal relationship with who still receive USAID, are likely to take some of the greatest hits. "A complete review of the sub-recipients... will tell a different story," Sia tells Bustle. "And beyond sub-recipients, there are the constellation of development and health organizations whose work will suffer from the fracturing of the health systems as vital health services are cut and programs and clinics close."

Unsurprisingly, there can be dire consequences to international nonprofits losing large chunks of their funding. Tia Jeewa, acting director of communications for the International Planned Parenthood Federation (IPPF), tells Bustle the organization has already seen the global gag rule impact a range of integrated sexual and reproductive health and health care programs in 29 countries. In Mozambique, for example, the loss of USAID support has forced IPPF member association Associação Moçambicana para Desenvolvimento da Família (AMODEFA) to reduce its personnel by 47 percent, as well as close 17 of its youth-friendly clinics and 72 mobil clinics.

In Botswana, the global gag rule has put 60 percent of IPPF member association the Botswana Family Welfare Association's funding at risk and led to a 71 percent reduction in skilled staff. Services at one clinic have been suspended while those at seven others have been scaled back to what Jeewa calls the "bare minimum."

Planned Parenthood isn't the only organization to call out the State Department's review. In a statement released Thursday, Pathfinder International, a global non-profit, charged that the review was carried out too early to properly assess the rule's impact. "Most of the impact expected under the global gag rule will not be evident until several months or years into the policy," the organization said. "As such, this review is an incomplete and insufficient analysis." They recommended continued analysis and monitoring. The organization declined Bustle's request to comment further.

The International Center for Research on Women also called the State Department's report "a premature and inadequate review" of the global gag rule's impact. "What they don't review is [the] impact it's having on millions of people worldwide who depend on U.S. foreign assistance for basic health care," the nonprofit wrote in a tweet published Thursday.

While it may be too early to understand the full scope and impact of Trump's global gag rule, studies of past versions of the rule showed it often leads to increased abortion rates, decreased access to HIV/AIDS services, and diminished health care efforts in poorer countries. And Trump's expanded policy may prove particularly devastating, as those who stand to be impacted the most are already some of the most marginalized and vulnerable populations across the globe.