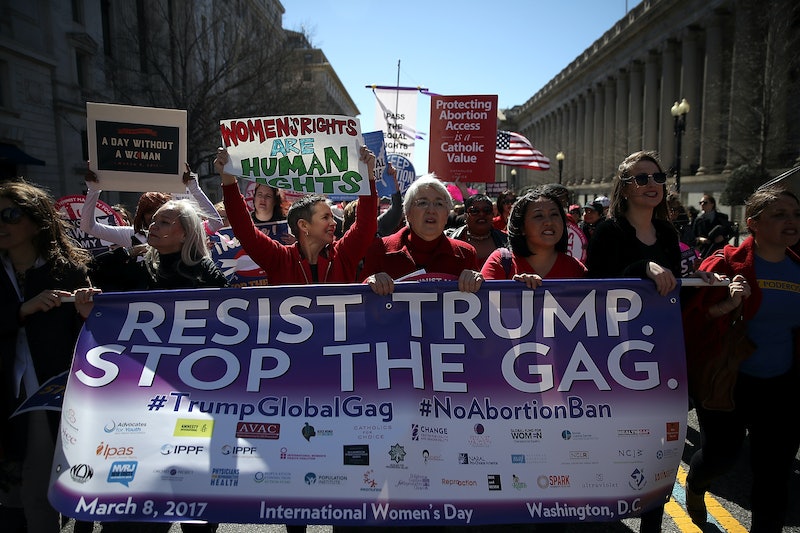 Although reinstating the policy was one of the first actions the president took in January, on Monday, Donald Trump's administration revealed details of expanding the Global Gag Rule. Also known as the Mexico City Policy, the Global Gag Rule targets funding of international women's health organizations that provide abortion services (which are already cannot be funded by the United States). Although the Global Gag Rule has been implemented by every Republican president since Ronald Reagan in 1984, every Democratic one since has rescinded it, and it was lifted by Barack Obama during his first term back in 2009.

The Global Gag Rule prohibits allotting funds toward international family planning providers that have even the most tangential ties to abortion care. According to some reproductive rights experts, the Global Gag Rule ends up depriving funds from hospitals and clinics that don't directly provide abortions, but rather, treat patients recovering from self-induced abortions. Providers that provide patients with even merely educational materials about abortion are subjected to the funding constraints.

Despite the fact that U.S. government funding already doesn't go toward abortions themselves — but instead toward birth control, HIV/AIDs prevention, and primary health care — Trump has expanded the Global Gag Rule.

Under Trump's plan, which is named Protecting Life in Global Health Assistance, the global gag rule will block $8.8 billion in global health supplied by the Department of Defense, the State Department, and USAID from going toward clinics abroad that provide everything from maternal and child health care, to birth control and HIV/AIDS prevention, under the suspicion that they supply women with information about abortions. As a point of comparison, the global gag rule under George W. Bush prohibited $600 million in family planning funds.

"There’s absolutely nothing pro-life about making it more dangerous to be pregnant, or making it impossible to stop pregnancies that could kill you."

While the Trump administration is framing this as a pro-life move, the results will end in more maternal death due to unsafe abortions and limited health care resources.

A study released from PAI, a global women's health organization, in January revealed that nearly 70,000 women die annually from unsafe abortions, and millions more suffer injuries from complications. Another study from the World Health Organization (WHO) conducted in 2011 revealed that the average number of abortions rose 40 percent in 20 countries between 2002 to 2008, the last period of time the Global Gag Rule was implemented. It's worth reiterating that last time, less funding was being pulled.

A senior director for Amnesty International USA, Tarah Demant, tells Bustle that Trump's expansion of the Global Gag Rule will not only impose health risks on women unable to access birth control or maternal care, but in many cases, result in death.

"There’s absolutely nothing pro-life about the Global Gag Rule. The data is very clear: When the Global Gag Rule is in effect, abortion increases," says Demant, "There’s absolutely nothing pro-life about making it more dangerous to be pregnant, or making it impossible to stop pregnancies that could kill you."

During her recent time traveling through Kenya, Somalia, and the Congo, the global rights activist and author Lisa Shannon witnessed the potentially dire, if not lethal, effects of pulling reproductive health care access from women

"What they do is they’ll leave home, give birth, and then either abandon the baby or murder them. That’s the choice for girls, if they don’t do it, they’ll be murdered themselves."

"The really extreme thing in Somalia is if you’re pregnant and you’re not married, your nearest male relative has a duty to kill you for honor reasons," Shanon says. "One girl told me her friend was consensually sexual with a boy at school, and the dad saw and burned her to death. So, what they do is they’ll leave home, give birth, and then either abandon the baby or murder them. That’s the choice for girls, if they don’t do it they’ll be murdered themselves."

Shannon also tells Bustle that hospitals and clinics that fear losing U.S. funding are often forced to turn away girls who could potentially die from self-induced abortions. She shares the story of a 16-year-old girl who got pregnant after having to turn to sex work to support her family. After giving birth to her first child, when she became pregnant again, "her family was so upset about it she went to a 'curtain clinic' to get an abortion," says Shannon. "It went terribly wrong. It was a partial abortion and so some of the fetus was still inside her and started to rot."

"The fact that the Trump administration has framed this as pro-life and pro-woman is absolutely twisted."

However, she couldn't get the care she needed because providers did not want to deal with someone who has attempted an abortion. "She went to get treatment in a hospital and was turned away," says Shannon. "Girls say they’re having a miscarriage to get treated, but they did an examination and found one of the abortion suppositories hadn’t completely melted, so they sent her home and she got more sick."

After a month, the girl's aunt took her to another clinic that ended up treating her, and she was able to recover, says Shannon. But in many cases, these stories end fatally.

Arguably, re-implementing the Mexico City Policy would only make this worse because it would increase the pressure on medical providers not to be associated with patients who have had abortions (or attempted abortions).

"The reality is, my main finding from all these countries is that it’s pushing all these women so far into a corner is the only choice they’re left to make is who dies," says Shannon. "The fact that the Trump administration has framed this as pro-life and pro-woman is absolutely twisted. It’s a death sentence for hundreds of thousands of women and girls."

More like this
How To Fight For Reproductive Rights, Based On How Much Time You Have
By Courtney Young
Michigan’s Governor Is “Going To Fight Like Hell” To Protect Abortion Access
By Andrea Zelinski
Manchester Arena Attack 5 Year Anniversary
By Ella Glover
Harry Styles Called For "Backlash" In Powerful Statement On Abortion Rights
By El Hunt
Get Even More From Bustle — Sign Up For The Newsletter