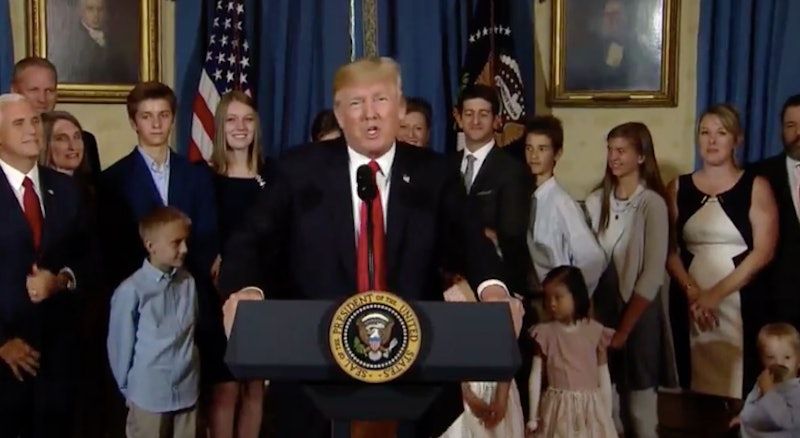 On Monday, Donald Trump issued a scathing statement on the Affordable Care Act from the White House. A video of Trump showed the president standing in front of a group of people as he urged Senate Republicans to commit to the party's demand of replacing and repealing Obamacare. The video has garnered a lot of attention on Twitter, with some saying the audience standing behind him proves that Trump only cares about white America's health care.

In response to a photo shared by NBC's senior editor Bradd Jaffy, some tweeted about how they couldn't help but notice how predominantly white Trump's guests were. Trump can be seen standing in front of several young white men and women.

Naturally, the photo elicited strong reactions on Twitter. One user tweeted in response, "Is the message that Obamacare only hurt WHITE people? Look at the people behind Trump."

One user named "Texas Hill Country" also criticized the lack of racial diversity in Trump's backdrop and said, "They are the only America Trump sees: white and middle class." Another user said that the predominantly white group of people behind Trump is his "version" of the United States.

One user simply asked, "Why are all the real families behind Trump all white?" Another user noted that "Donald Trump's talk about health care is nightmarish. Behind him he has rich, white families who are 'suffering' apparently."

Some observed the apparent lack of African Americans in the video. A user named Laurie Crosswell said, "Not one African American is standing behind Donald Trump. I guess he believes they don't need health care."

To be fair, Trump's background does have a tiny dash of racial diversity. Although obscured from the general view, the video does show a glimpse of a young girl who appears to be Asian. But the issue apparent in the tweets posted by different users today is about the overwhelming majority of white people in Trump's video. As evident in the aforementioned tweets, some felt the video did not truly reflect American diversity.

In his statement, Trump said that the Senate is inching closer to passing the repealing and replacement of Obamacare but that the bill would require every single vote from Republicans. Trump also said that the Republican party had "zero help" from the Democratic party which Trump described as "obstructionists." He went on to say, "Any senator who votes against starting debate is telling America that you are fine with the Obamacare nightmare, which is what it is."

At this moment, the future of the Republican health care bill appears to be shaky. With opposition from both moderate and staunch conservatives, it is unclear whether today's harsh statement from Trump will actually move cynical senators in his favor.