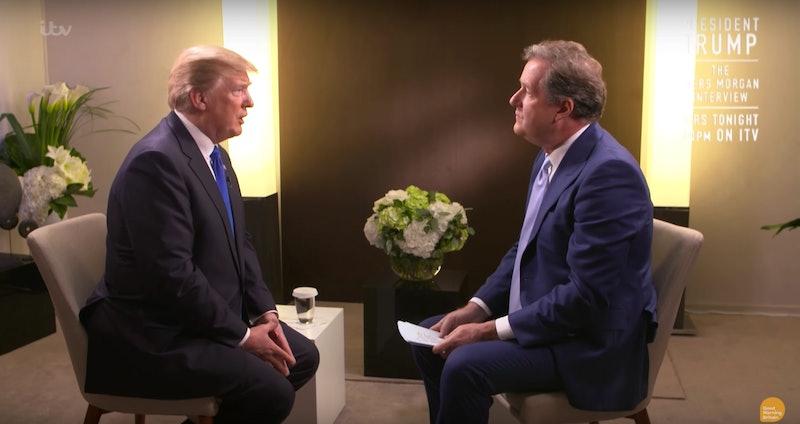 On Sunday, the United Kingdom's ITV aired Piers Morgan's interview with Donald Trump — an appearance which constituted the president's first international television interview. The duo covered a range of topics, but Trump's comments on the environment particularly stood out for some, as the president seemed to question the existence of climate change and global warming with his remarks.

During the interview, Trump appeared to confuse the concepts of global warming and climate change — and also implied that it is "too cold" for global warming to occur.

There is a cooling and there's a heating — I mean, look, it used to not be climate change. It used to be global warming. That wasn't working too well because it was getting too cold all over the place.

Trump further expressed his doubts about global warming by noting that he believed that polar ice caps are setting records.

The ice caps were going to melt. They were going to be gone by now, but now they're setting records, okay? They're at a record level.

As Bloomberg reported, Trump's comments stand in contrast to scientists' findings. The outlet noted that data released from the National Oceanic and Atmospheric Administration in January revealed that 2017 was the third hottest year on record and that seven of the 18 hottest years ever recorded have been in the 21st century. Moreover, Scientific American also reported that the NOAA report showed that, in every year since 1997 in the United States, temperatures have been warmer than average.

Despite relatively cool summer temperatures, observations in 2017 continue to indicate that the Arctic environmental system has reached a "new normal," characterized by long-term losses in the extent and thickness of the sea ice cover, the extent and duration of the winter snow cover and the mass of ice in the Greenland Ice Sheet and Arctic glaciers, and warming sea surface and permafrost temperatures.

Furthermore, a report made by NASA last year was even more telling, revealing that, as of March 2017, Arctic sea ice on both poles had reached its lowest levels since 1979 — the first year that sea ice data was continuously recorded by satellite.

In addition to his confounding remarks about climate change, Trump also discussed United States' withdrawal from the Paris climate accord, a decision his administration announced in June. Trump expressed to Morgan that he believed that the accord was "unfair" to the U.S.

I believe in clean air. I believe in crystal clear, beautiful water. ... I believe in just having good cleanliness and all. Now, with that being said, if somebody said go back into the Paris accord, it would have to be a completely different deal because we had a horrible deal.

Trump also indicated that there exists a possibility that the U.S. could re-enter the Paris Agreement, but that securing a "good deal" for the United States would be essential before his administration would proceed on the matter.

Would I go back in? Yeah, I'd go back in. I like, as you know, I like Emmanuel [Macron]. I would love to, but it's got to be a good deal for the United States.