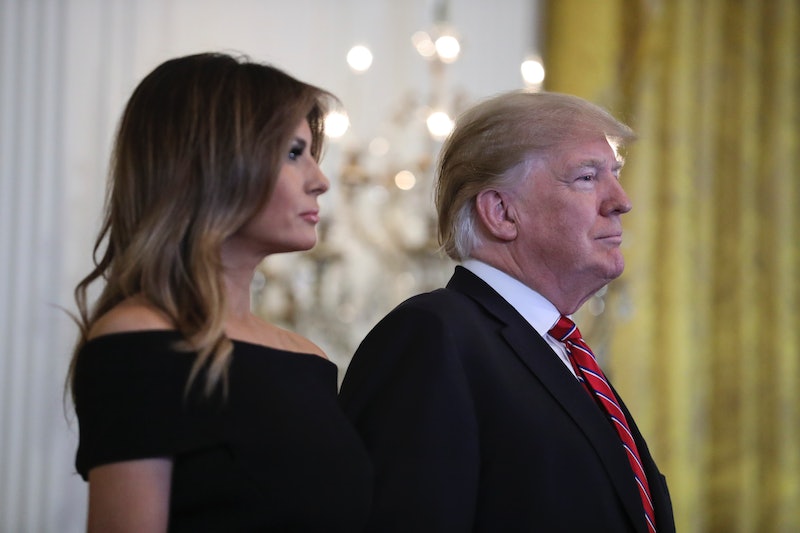 The president and first lady left for their first-ever visit to active-duty troops on Christmas Day this year. The couple kept it a surprise, landing at al-Asad Air Base, a joint U.S.-Iraqi military base near Baghdad, Iraq, on Wednesday morning. But the president, who has faced criticism in the past for not following the tradition of visiting service members in combat zones, admitted he felt a little uneasy about the visit. According to Newsweek, Trump's Iraq trip reportedly made him concerned for Melania, though the exact reason why is somewhat ambiguous.

After a reporter asked him to elaborate on that uneasiness, according to a Time magazine transcript of the event, he said,

I had concerns about the institution of the presidency. Not for myself personally. I had concerns for the First Lady. But if you would have seen what we had to go through in the darkened plane with all window closed with no light anywhere. Pitch black. I’ve been on many airplanes. All types and shapes and sizes. So did I have a concern? Yes, I had a concern.

Trump did not elaborate on his concerns about Air Force One being dark, though it seems possible he was worried for Melania's safety during the visit.

Post-9/11, both Presidents George W. Bush and Barack Obama made a habit of visiting combat zones in Afghanistan and Iraq. Despite vocal support for American military forces, Trump has come under fire in the last few months for skipping some military memorials, and until now, not visiting active-duty troops overseas.

Previously, according to the Associated Press, he's described combat zone visits as not "overly necessary." According to White House advisers who spoke to The Washington Post, Trump explained that he doesn't agree with the missions being executed in Iraq and Afghanistan anyway, referring to them as "a total sham."

"He’s never been interested in going," one official claimed to The Post. "He’s afraid of those situations. He’s afraid people want to kill him."

On this visit, the president and first lady spent about three hours at al-Asad Air Base before flying to Germany and then back to D.C., according to ABC. Despite his somewhat unclear "concerns" expressed during the press spray, Trump did say he thought it was important to show up to support service members where they were deployed. "[Iraq is] a place that I’ve been talking about for many years. And many, many years, before it started, I was talking about it, as a civilian," he told reporters, according to The Post. "I want to come and pay my respects, most importantly, to the great soldiers, great troopers we have here."

The visit appeared celebratory, with soldiers gathering to take photos with the president and first lady, according to ABC. Patriotic songs played, including Lee Greenwood's "God Bless the U.S.A." when the president appeared on a stage to deliver his remarks, reported The Post. "We're no longer the suckers, folks," he told the service members. "We're respected again as a nation."