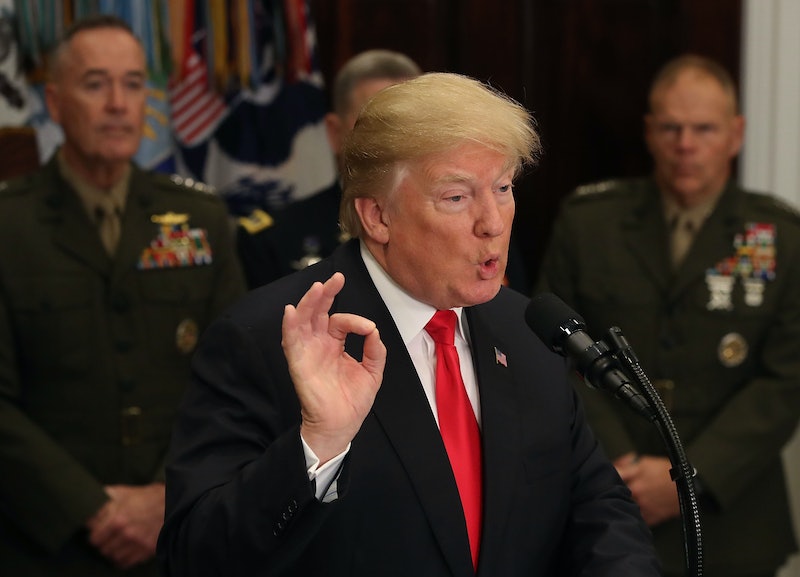 In a shocking, but not surprising, move on Tuesday morning, Trump claimed that Kirsten Gillibrand "would do anything" for campaign contributions — an implicit reference to sexual favors. "Lightweight Senator Kirsten Gillibrand... someone who would come to my office “begging” for campaign contributions not so long ago (and would do anything for them), is now in the ring fighting against Trump," he wrote on Twitter. If any other man, in any other field, had publicly suggested that a subordinate woman "would do anything" for personal gain, it would be considered sexual harassment — and this should be, too.

Trump fills this quota, and then some, in his attack on Sen. Gillibrand. First off, Gillibrand is not the only senator to call for Trump to resign in light of the many, many accusations of sexual violence committed by him. She is, however, the only female senator of that group. If Trump wanted to deride big-name politicians who have called for his removal from office, he could have laid into Bernie Sanders — who has also declared Trump should resign — alongside Gillibrand. Sens. Cory Booker, Jeff Merkley, and Ron Wyden have also said the same.

Trump chose Gillibrand to pick on, then, because Gillibrand is the only woman senator facing off against the president, and ignored her colleagues who did the same. Which, yes, is sexual harassment.

It's not hard to spot the other ways that Trump's comment about Sen. Gillibrand constitutes sexual harassment, but let's try to find them all, shall we?

By anybody's standards of a person, and certainly by anybody's standards of a person elected to public office, Kirsten Gillibrand is no "lightweight." Gillibrand is one of the most prolific senators of her time, and in just nine years in Congress has risen to a position of power outdoing many of her male peers. She's been widely tipped to run for president in 2020 — which is probably why Trump is setting the groundwork to discredit her now — and in her last election won 72 percent of the vote, which The Atlantic noted was "a higher percentage than the senior senator [Chuck Schumer] has ever garnered."

To describe Gillibrand as a "lightweight," then, is to bypass logic entirely and to take advantage of an age-old stereotype about women — that we are weak, and certainly too weak to serve in the "man's world" of politics.

Let's move on to "begging for campaign contributions." As part of his campaign to discredit Gillibrand, and therefore discredit her claim that he's unfit to serve in the Oval Office, Trump is here painting Gillibrand as a desperate, try-hard, weak (that theme again!) individual. If you wonder how that's sexist, consider whether Trump would use the same term — "begging" — about a male senator.

Onto the most flagrantly sexist part of Trump's statement, "and would do anything for them." Here's what Trump is implying: That Sen. Gillibrand, an esteemed political figure and fierce advocate against sexual harassment, would trade sexual favors in exchange for campaign contributions. She would do this with Trump, it's implied, but also to other high-ranking figures from whom she could acquire funds.

There's a stark message here: Not only am I, Donald Trump, innocent of sexually harassing the people around me, but the person pushing for my resignation is guilty of exactly that.

It's an ugly and shameless response, and Gillibrand and allies were quick to stand up to it. "Are you really trying to bully, intimidate and slut-shame @SenGillibrand?" replied an incredulous Elizabeth Warren. Gillibrand, meanwhile, simply wrote

You cannot silence me or the millions of women who have gotten off the sidelines to speak out about the unfitness and shame you have brought to the Oval Office.

And that's not all, folks! "In the ring fighting against Trump" is yet another reference to Sen. Gillibrand's perceived weakness and inability to "fight like a man." Gillibrand does not belong "in the ring," Trump is implying. Yet, he does not suggest the same about Cory Booker or Bernie Sanders, which suggests that he's comfortable fighting men in the "ring" — just not a woman.

It's anyone's guess what Trump means by "Very disloyal to Bill & Crooked-USED!" — is he saying the Clintons used Gillibrand? That Gillibrand used the Clintons? — but what is clear is that Hillary Clinton, who beat Trump by several million popular votes, isn't even granted a name. Instead, she's referred to only by the nickname Trump has bestowed on her, whereas her husband is cordially referred to as "Bill."

Perhaps it shouldn't come as a surprise that Trump is openly harassing a woman on Twitter. After all, this is the same man who famously said:

I'm automatically attracted to beautiful women — I just start kissing them, it's like a magnet. Just kiss. I don't even wait. And when you're a star, they let you do it. You can do anything. Grab 'em by the pussy.

Even more concerning is that Trump made this comments without fear of repercussions, suggesting that he's used to not being held accountable for the harassment of women. While Sen. Gillibrand has a robust security team and may not fear her personal safety or employment status because Trump harassed her, this is absolutely not true of most women who are victims of sexual harassment. It cannot be brushed over.