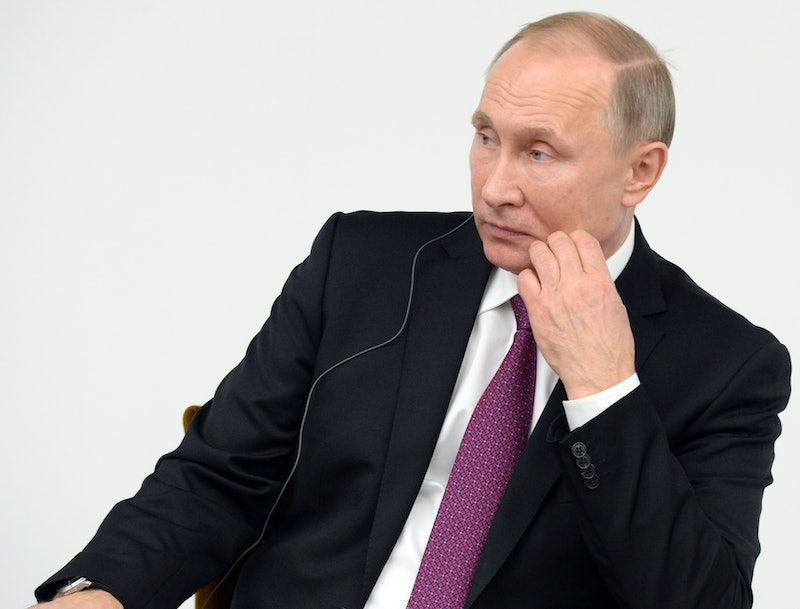 Fox News has released a preview of Bill O'Reilly's exclusive, pre-Super Bowl interview with President Donald Trump, and even just that little snippet has already set the country abuzz. Trump's latest statement on Vladimir Putin, which came when O'Reilly pressed Trump about Putin being "a killer", marks a new low in terms of how low Trump will go to defend the Russian leader.

The preview starts with a question — and an answer — that you've definitely heard before. O'Reilly asked Trump if he respects Putin, to which Trump predictably responded that he does. He then danced around O'Reilly's question of why he respects Putin, saying "I respect a lot of people, but doesn't mean I'm going to get along with him. He's a leader of his country."

After Trump gave his usual statement about how he thinks it's better to get along with Russia than not and how he thinks they can help in the fight against ISIS, O'Reilly tried to pin the president down by flat out stating that "he's a killer, though. Putin's a killer." And this is where things got very weird, for anyone who's followed the news coming out of Russia over the past couple of years. Before responding to that statement, Trump seemed to weigh it in his head, as though O'Reilly had asked him about which team he thought would win the Super Bowl.

Let me just break that down for a second. First of all, Trump doesn't deny that Putin is in fact a killer, and it would be ridiculous for him to try. The life of a prominent Putin critic is currently in great danger after a suspected second poisoning, and Trump has not spoken out at all on that matter. Secondly, it reaffirms his respect for the former KGB leader, despite his history as a killer. Thirdly, he insinuates that the same sort of extrajudicial killings happen in the U.S., and that he is okay with that.

Refusing to take a strong stance on this particular way in which Putin runs his government — that is, by killing politically inconvenient people — seems like exactly the sort of weak governance that Trump used to blast Obama for. There certainly is a history of American extrajudicial killings, but it does not include targeted assassinations of political opponents. Putin heads up a government apparatus that has very little in common with the American democracy — and Trump simply does not seem to recognize that.

His dogged insistence on praising the Russian president is at odds with a lot of the American values he claims to protect and stand up for. One can only imagine what he would have said if Barack Obama had acted this way towards Putin — and yet Trump can't seem to do anything differently.