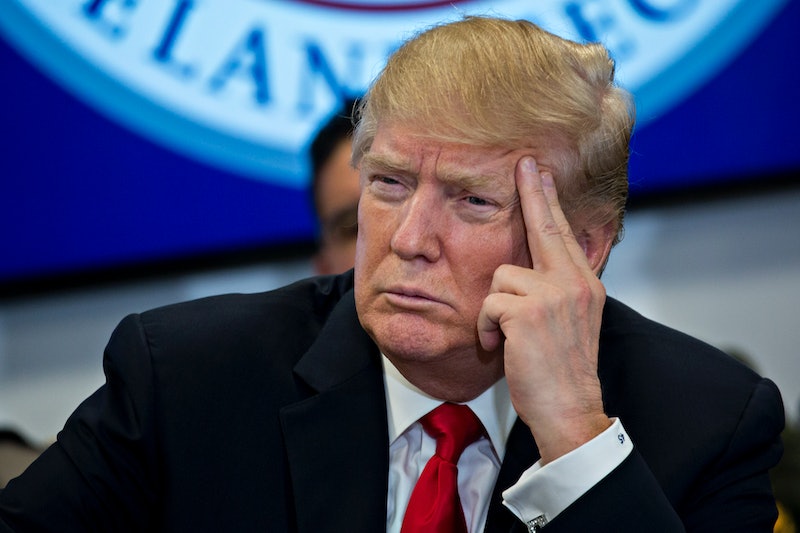 On Monday, the New York Times reported that Donald Trump's lawyers don't trust him alone with Robert Mueller. The president's lawyers are reportedly concerned that his habit of exaggerating (or straight-up lying) could land him in legal trouble. Now, they supposedly want to ensure that he avoids putting himself in a private interview situation with the special counsel for the Russian investigation.

In January, Trump indicated to reporters that he was willing to speak under oath with Special Counsel Mueller, who is investigating any alleged ties between the Trump campaign and Russia (ties which Trump has repeatedly denied). At the time, Trump told reporters that he was "looking forward to it [the interview]" and he would "love to do that ... as soon as possible."

However, despite the president's seeming interest in having a chat with Mueller, his lawyers are reportedly strongly advising against it. As the Times noted, John Dowd, Trump's defense lawyer, Dowd's deputy Jay Sekulow, and a variety of White House advisors strongly oppose the idea of Trump voluntarily having a discussion with Mueller, out of concern for a potential legal quandary. The Times also noted that one of the few people supporting a voluntary interview is Ty Cobb, another lawyer working for Trump on the Mueller investigation. However, Dowd, not Cobb, has reportedly taken the lead in handling the special counsel's requests.

According to the Times, Trump's lawyers who are against the president speaking to Mueller voluntarily are hoping that the special prosecutor will be unwilling to subpoena the president. That means Trump could potentially avoid a discussion with Mueller altogether by refusing a voluntary interview. However, they also run the risk that Mueller could indeed subpoena Trump and that Trump's legal team would have to fight the subpoena in court. A court case brings risk, as a win is evidently not guaranteed. Moreover, it would also cause the investigation to last longer than expected, something which, according to the Times, Trump's team reportedly wants to avoid.

According to CNN, at the end of January, Mueller made it clear to the White House that he wanted to have an in-person interview with the president. The same month, Mueller submitted a list of what he wished to discuss with Trump to Trump's legal team. As CNN noted, one of these topics includes learning more about Trump's alleged interactions with former FBI Director James Comey as they related to the firing of former national security adviser Michael Flynn (Trump denies any inappropriate interactions).

According to Neal K. Katyal, an acting solicitor general in the Obama administration, via the New York Times , presidents do usually cooperate with requests from investigating authorities both because they are still subject to the law as president and because they have a constitutional responsibility to ensure that the law is carried out. As Katyal put it:

In general ... presidents do sit for interviews or respond to requests from prosecutors because they take their constitutional responsibility to faithfully execute the laws seriously, and running away from a prosecutor isn’t consistent with faithfully executing the laws.

Thus, it seems that Trump's decision about whether or not to voluntarily speak with Mueller could potentially present complications either way. If the president does speak with the special counsel, his lawyers are concerned about his penchant for bending the truth. If he does not, Trump could find himself in a lengthy legal battle that draws even more attention to the issue. Whether or not Trump responds to Mueller's request for a personal interview, you can bet things will get interesting at one point or another.