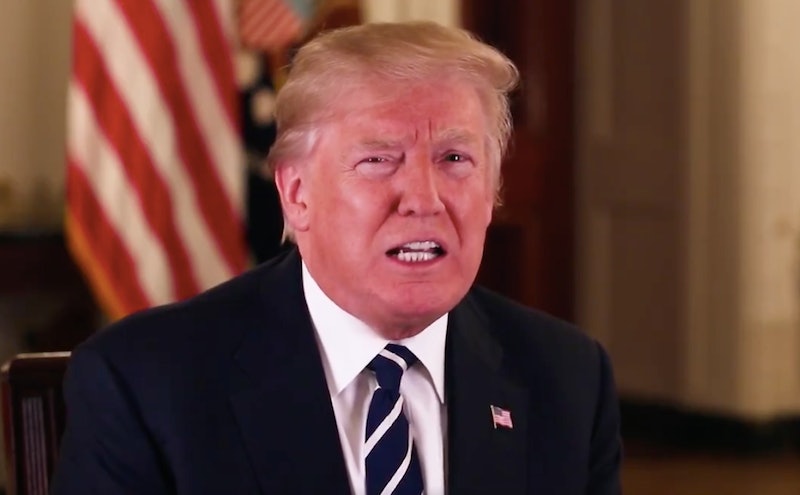 As presidents generally tend to do on Martin Luther King, Jr. Day, Donald Trump released an MLK Day statement via a video on Twitter. If you've been following some of Trump's other statements from the first year of his presidency, you might think his message in the MLK Day statement doesn't exactly sound genuine coming from him.

Speaking about King's oft-remembered dream, Trump said that "It is the dream of a world where people are judged by who they are, not how they look or where they come from." While this is indeed an admirable sentiment, it drips of insincerity coming from President Trump.

In short, neither Trump's actions nor his words suggest that he truly believes anything that he said in his MLK Day speech.

Going on about King's dream, Trump said that "It is the dream of a nation that offers a life of dignity and hope to every American, regardless of color or creed." Again, there's no problem with the words — but millions of Americans might take issue with the person saying them. For example, Muslim Americans who have seen more hate crimes against the members of their community might not appreciate it. Transgender servicemen and women who can only keep their positions in the military now because a judge blocked Trump's ban on it probably don't feel like they've been given a life of dignity. Trump's moves to kill DACA certainly haven't given any hope to the Dreamers, who are as American as he is for all intents and purposes.

The people who fought alongside King, Trump said, "were the heroes that led a nation forward towards a future that is more just a more free." Those people, however, most likely would not have responded to a Neo-Nazi rally by blaming both the Neo-Nazis and the people marching against them, as Trump did not once but several times.

As one of his closing lines, Trump offered a series of platitudes that go point blank against some of the most memorable moments of his still-young presidency:

On this cherished day, we honor the memory of Reverend King, and we rededicate ourselves to a glorious future, where every American from every walk of life can live free from fear, liberated from hatred, and uplifted by boundless love for their fellow citizens.

Americans worried that Trump's tweets might start a nuclear war aren't living free from fear, nor are those worried about the immigration status of their friends and loved ones threatened by Trump's immigration policies. Those who watched as Neo-Nazi groups said that they felt emboldened by Trump's response to their rallies likely don't feel that they are free from hatred. Boundless love is not the message one gets from reading Trump's tweets, which so often include insults to his political opponents (and sometimes political allies), media personalities, the free press, foreign leaders, and whatever else comes across his path when he happens to have access to his Twitter account.

Trump managed to read off a teleprompter and successfully talk the talk in this MLK Day statement. Walking the walk, however, is an entirely different story. Saying that he has a long way to go before his administration will actually be working towards the goals put forward in this speech is an understatement almost as hyperbolic as Trump can be himself.