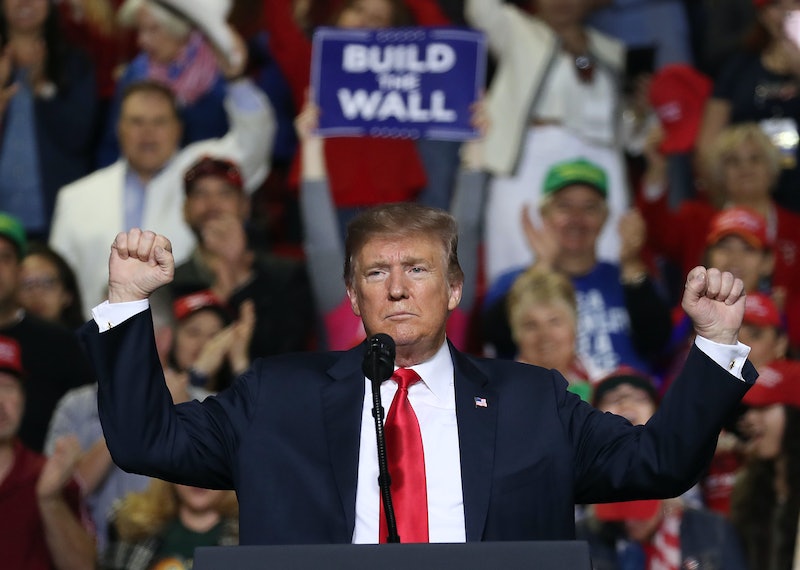 After unsuccessfully managing to get funding for his border wall from Congress, President Donald Trump declared a national emergency along the U.S.-Mexico border on Friday, claiming there was "an invasion of drugs and criminals coming into our country." But Trump's national emergency is already facing a lawsuit, with more expected to follow. A progressive consumer rights group and think tank filed a federal lawsuit against the president just hours after his declaration.

"We just sued Trump over his fake national emergency," consumer rights advocacy group Public Citizen said in a tweeted statement released Friday. "If Trump gets away with this, there's no telling what the next concocted 'emergency' will be, who will be targeted and what emergency powers will be claimed. We refuse to tolerate this slide to authoritarianism." Bustle has reached out to the White House for comment.

The lawsuit is an attempt to block the Trump administration from capitalizing on a national emergency declaration that allocated some $8 billion for the border wall. Public Citizen said Friday they were suing the president and his acting secretary of defense on behalf of the Frontera Audubon Society and three Texas landowners who've reportedly been told that sections of the border wall would be built on their properties should funds be made available.

In a press release issued Friday, the consumer watchdog accused the president of having "exceeded his constitutional authority and authority under the National Emergencies Act," reported. The group also alleged that Trump's national emergency declaration "violates the doctrine of separation of powers that is so central to our Constitution."

The lawsuit essentially argues there is no national emergency happening along the country's southern border and that Trump's declaration is actually an attempt to bypass Congress for funding appropriation — something the group has alleged exceeds his power. "The president has no inherent authority to declare emergencies to override appropriations laws and other laws enacted by Congress; his emergency powers are defined and limited by statute," Public Citizen's lawsuit reads. "Because no national emergency exists with respect to immigration across the southern border, the President’s Declaration exceeds the limited authority delegated to the President."

But the lawsuit filed Friday by Public Citizen is expected to be just one of many legal challenges brought against Trump's national emergency declaration. In fact, the American Civil Liberties Union (ACLU) announced plans Friday to file a lawsuit challenging what they called Trump's "blatantly illegal declaration of a national emergency."

"There is no emergency," the nonprofit said in a tweeted statement. "This is an unconstitutional power grab that hurts American communities. We'll see him in court."

According to NPR, the state of California has also announced plans to challenge the president's national emergency declaration in court. California's attorney general has argued it's Congress, not the president, who has the authority to control the spending of federal money.

But the flurry of lawsuits challenging his national emergency declaration aren't likely to come as a surprise to Trump. In announcing he'd declared a national emergency Friday, the president said he expected to be sued and, what's more, he expected lower courts to rule against him. "We'll win in the Supreme Court," The New York Times reported he said.