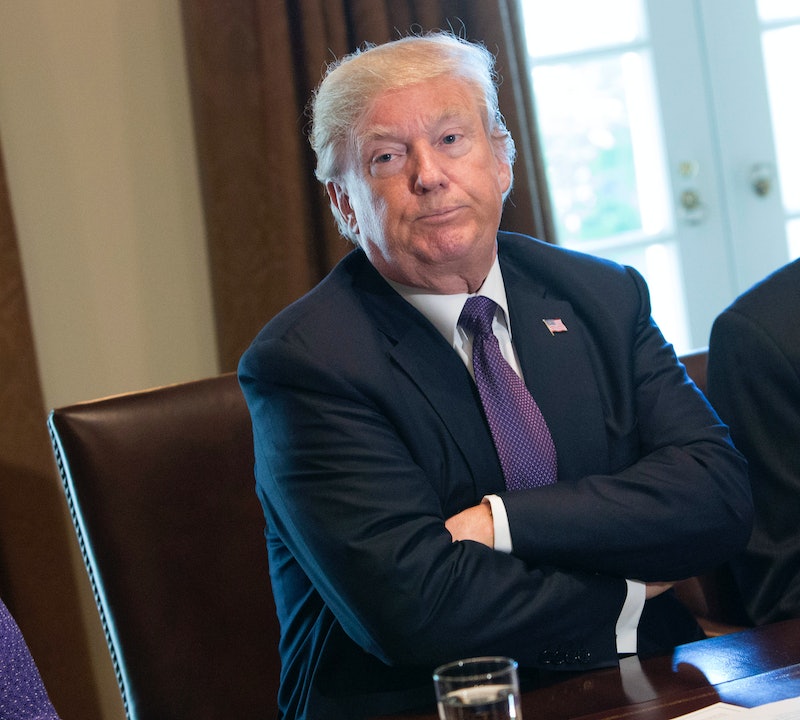 Donald Trump ran for president as a businessman. His argument was simple: His record as a real estate developer and owner of hotels and casinos was more important for running the country than a history in politics. Though details of his assets are impossible to assess without access to his tax returns, the president is generally assumed to be a billionaire. Unfortunately, according to Wednesday's Forbes list of America's 400 richest people, Trump's presidency has done some serious damage to his brand.

Trump has been a fixture of the Forbes 400 for years. This year, according to the magazine, he was the "most notable loser" of 2017. Trump's financial loss is likely caused by issues affecting his personal brand thanks to his becoming president, says Ian Stephens, the CEO of Principia Consultants, a brand strategy firm.

"The pre-president Trump brand stood for effective deal making at the investor/developer end of the business," Stephens wrote to Bustle in an email.

According to Forbes, Trump's 2016 losses are attributable to "a tough New York real estate market, particularly for retail locations; a costly lawsuit and an expensive presidential campaign."

Trump's business are especially liable to damage to his brand, because branding has in recent years been the vast majority of his business model. President Trump does not own many of the buildings that have his name on them. Rather, Trump hotels, along with many of the other products he's associated with, are licensing deals — someone else pays him money in exchange for being able to put his name above the door to the hotel. Since Trump's brand was generally associated with ideas of luxury and success, putting it on the buildings made it easier to sell units.

But, according to Stephens, damage to Trump's brand could shut off that money source for the Trump organization. "Real estate owners make Trump richer when having a Trump sign above the door stands for something attractive that customers are ultimately willing to pay a premium for," Stephens says. "If that association goes sour, in the long term that association could become negative — even toxic — and licenses won’t be renewed."

Trump's fall in the Forbes list could mean additional damage to his brand: If your brand is based on your ability to make money, then losing lots and lots of money would presumably make that brand feel less true to consumers.

"A luxury brand trading on themes of ‘excess, wealth, gold-plated taps etc’ is more tangibly connected to the pile of dollars that brand generates," Stephens says. "It’s not easy to say that Brand Trump trades on other values so it’s reasonable to say that if the pile of dollars shrinks so does the attractiveness of the brand — in direct proportion."

On the other hand, Trump's brand could remain somewhat insulated from the Forbes list or any other event related to his businesses. Trump is president, and news about what he's doing in the White House will probably outweigh any news about his own fortune, and therefore probably have a bigger effect.

That said, with a presidency that is historically unpopular, Trump's personal brand could be facing more trouble in the future. On businesses that might want to invest in Trump's brand, Stephens writes, "There’s a market for it, but it’s money you must be prepared to see evaporate overnight and not be terribly surprised if that happens."