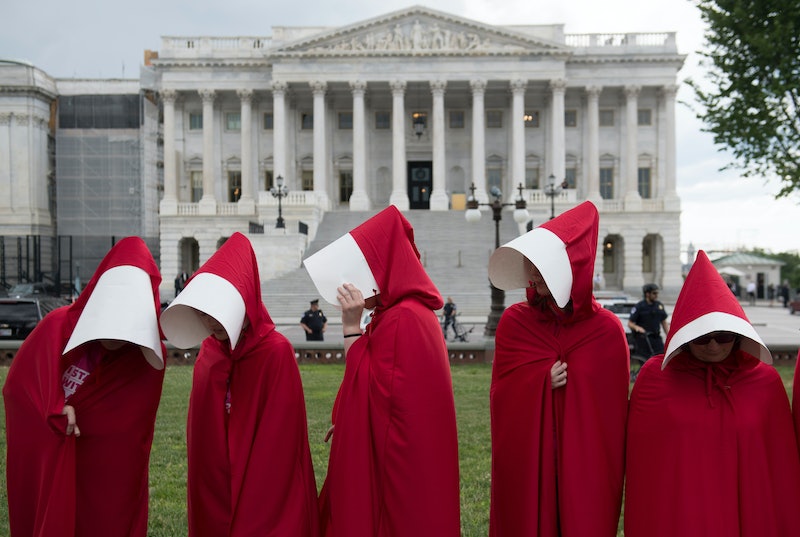 On Friday, Oct. 6, the Trump administration moved to roll back the Obamacare mandate that made birth control available without a co-pay for an estimated 55 million American women, trans, and gender non-conforming folks who get their insurance through their employer. The new guidelines allow employers to refuse to offer insurance plans that cover birth control if they feel it’s a violation of their religious freedom, or if they have a moral objection to it. Many people were quick to criticize the new rule, which will go into effect immediately, saying that it has nothing at all to do with religious freedom — and everything to do with controlling women’s bodies. Bustle spoke to female religious leaders who explained exactly why obstructing access to birth control doesn’t protect religious liberty at all.

“To the reform rabbinate as a whole, this country was founded on the concept of freedom of religion, and freedom from religion,” Rabbi Hara Person, Chief Strategy Officer at the Central Conference of American Rabbis (CCAR), tells Bustle. “The idea that somehow we’re ruled by theologians and not the Constitution flies in the face of what religious liberty is supposed to be about.”

Moreover, as Rev. Marti Keller, a Unitarian Universalist, explains, giving the right to religious freedom to companies, and not to individuals, is wholly misguided in its own right. “It’s not the employer that’s providing that service,” she tells Bustle, referring to contraception access, it’s the insurance. Employers “are not the ones that are in any way forced to provide that service directly.” Therefore, in her estimation, employers shouldn’t have a say one way or the other when it comes to their employees’ health care.

“What a woman does with her body is up to her, her values, religious beliefs, her medical caregivers, any religious advisor she chooses to go to. That’s how those decisions should be made, and not forced based on one particular group of people’s interpretation of rights,” Person says. “Part of what gets lost in the conversation is that there’s really significant health issues involved in these decisions,” says Person, referencing the fact that people use birth control not only for family planning, but as medical therapy for endometriosis, PCOS, and other disorders. “There’s the idea that women are capricious and irresponsible and make these flighty decisions,” but that idea is patently false. People seek out birth control (or have abortions, as Person mentions) for a variety of reasons — “stability of existing family structures, poverty, medical health,” to name just a few.

If, as Person suggests, a paramount aim of birth control — stabilizing family structures — is indeed one of “the things the right says it wants, ironically,” as she says, then what, exactly, is this decision about, if not about religious liberty?

“[Conservatives] are talking about something vague, and much larger” than the debate around birth control, says Keller. It has everything to do with “not wanting women to have agency over their lives,” she says. “It’s about controlling women — that to me is pretty clear,” says Person. “The accessibility of contraception has completely changed the choices women can make in their lives. They can support families, get education, contribute to society, and raise healthy children who can do the same.” These are age-old arguments in favor of access to contraception, but the fact that they’re still needed in 2017 demonstrates how far backwards this move takes us in terms of reproductive rights.

As the arguments from these two faith leaders suggest, it is wholly possible to be pro-choice, pro-access, and pro-religious freedoms — all at the same time. What the Trump administration is doing, however, in issuing these new allowances for employers, is deliberately dismissing women’s, trans folks’, and gender non-conforming people’s rights not just to contraception, but to their own freedom of religion as well.