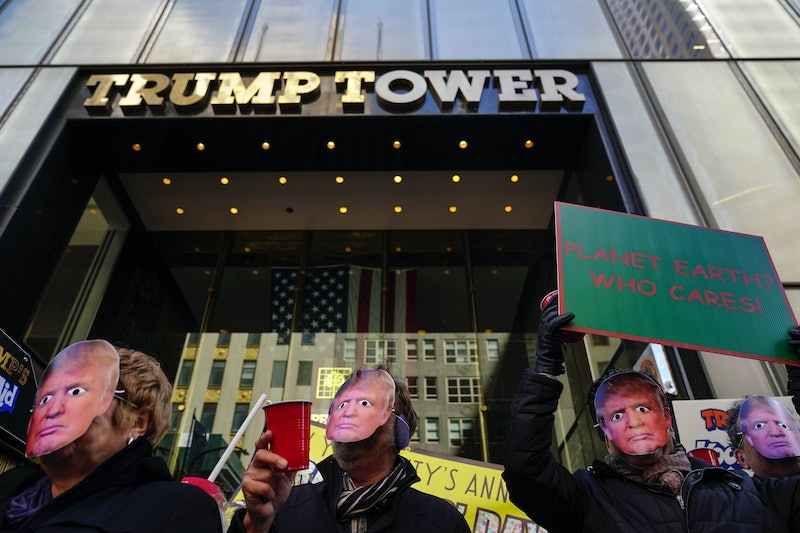 Last month, New York City passed its own Green New Deal, and the president may soon feel its impact. Donald Trump's New York properties could be fined $2.1 million over their environmental impact if they don't undergo significant renovations before 2030, Newsweek reports. New York City Mayor Bill de Blasio held a rally near Trump Tower on Monday, and said in a statement that he was putting Trump "on notice."

"Our message is loud and clear,” de Blasio said in a statement. “We’re tackling climate change head-on with NYC’s Green New Deal and are the first city in the world to require all big buildings to cut their emissions, with the goal of a carbon neutral city by 2050. President Trump – you’re on notice. Your polluting buildings are part of the problem. Cut your emissions or pay the price.”

In a press release, de Blasio's office contended that eight Trump properties in the city emit as much greenhouse gas each year as 5,800 cars. The mayor's office estimated that Trump will owe the city about $2.1 million in fines every year if he doesn't make his properties more environmentally friendly. Bustle has reached out to the Trump Organization for comment.

The city's Green New Deal was comprised of six different bills, Curbed reports, and aims to decrease greenhouse gas emissions among New York buildings by 40% before 2030. De Blasio's office estimates that the Trump International Hotel & Tower — located at 1 Central Park West — would accrue the greatest amount in annual fines should the building's greenhouse gas emissions remain at their current level. Per a statement from the mayor's office, the property may accrue about $850,871 in fines each year, with others estimated to be billed between $26,629 and $469,848.

“The people in the White House still won’t acknowledge that climate change is a global crisis," Rep. Eliot Engel said in a joint statement with de Blasio's office. "Perhaps this NYC Green New Deal will help get their attention."

For his part, de Blasio is understood to be considering a presidential campaign, per The Washington Post, and is expected to make a decision about whether or not to run within the next week. During the rally he hosted outside of Trump Tower, he certainly didn't hide his stance on Trump policies. According to reports, the event even attracted a group of protesters who held pro-Trump signs.

"They’re just music to my ears, because it means we’re doing something important in New York City," de Blasio said, according to The Post. "If all these people who support President Trump are opposing what we’re doing, we must be doing something right."

New York's Green New Deal comes as a federal Green New Deal has become a major topic of conversation in Washington. But as the national version of the plan continues to be debated, some cities, like New York, have ventured out on their own to promote similar policies at the local level. Although it's too soon to say what will become of the Green New Deal before Congress, New York has made clear that it is willing to take serious steps toward fighting climate change.