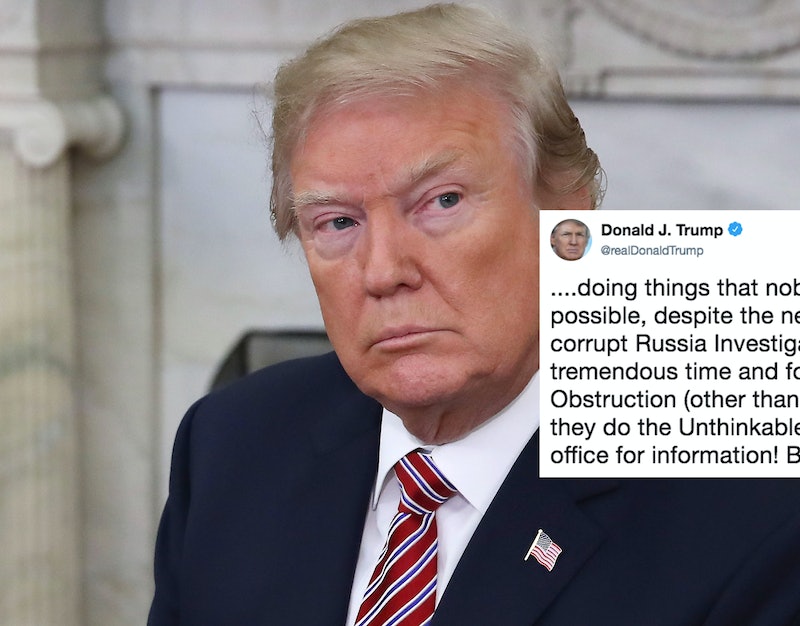 President Trump's early-morning Twitter rant on Wednesday took a turn that some social media users believed was nearly incriminating. When the president wrote that he hadn't committed obstruction "other than I fight back," people on Twitter wondered whether the post amounted to Trump admitting to obstruction of justice.

I (we) are doing things that nobody thought possible, despite the never ending and corrupt Russia Investigation, which takes tremendous time and focus. No Collusion or Obstruction (other than I fight back), so now they do the Unthinkable, and RAID a lawyers office for information! BAD!

Twitter users were struck by the phrasing of his tweet. Saying that you didn't do something but then immediately adding an exception ("other than") sounds like an admission of guilt, they argued.

To be found guilty of obstructing justice, a person needs to be proven to have had "corrupt intent." In other words, when Trump impedes investigations, is he doing it on purpose? If his intention is "fight[ing] back," it does sound rather like the president has been consciously hindering federal investigations.

Several comments the president made publicly in the past have also been interpreted by his opponents as public confessions. In an NBC interview last May, Trump told Lester Holt that he had had "this Russia thing" in mind when he decided to fire James Comey (potentially signifying that he had intended to stop Comey from investigating collusion between his presidential campaign team and Russian officials). In December, he tweeted that he had fired Gen. Michael Flynn because he "lied" to the Federal Bureau of Investigations (implying that he already knew that his National Security Advisor had committed a crime when he asked Comey to stop investigating him).

An April 3 article in The Washington Post revealed that Robert Mueller is preparing a report on Trump's tenure in the White House and whether or not he obstructed justice. The piece indicated that Mueller might still bring an obstruction case against the president, whereas it seems less likely that he will attempt to indict Trump for charges related to collusion.

Trump is apparently not a current target of Mueller's criminal investigation, which means that even if Mueller's report does argue that Trump obstructed justice, it's unlikely that he will try to indict the president for the crime. Whether or not the Justice Department has the authority to do so is an open question. Some commentators believe that the most radical move at Mueller's disposal is to instead present a case for Trump's impeachment to Congress, as an independent counsel did in the case of Bill Clinton.

Further complicating the obstruction issue is the news, broken by The New York Times on Tuesday, that Trump attempted to fire Mueller in December. He heard that Mueller had subpoenaed his business endeavors with Deutsche Bank and told his advisors that the special counsel investigation had gone too far. Trump reportedly said that Mueller needed to be removed, but his advisors eventually talked him down.

The report builds on a previous one from January in which The New York Times revealed that Trump had ordered Mueller to be fired during the previous June. It's possible that an obstruction of justice case against Trump could use his hostility to Mueller as evidence that he's been resisting the special counsel investigation more broadly. Mueller's report could be ready as soon as the early summer.