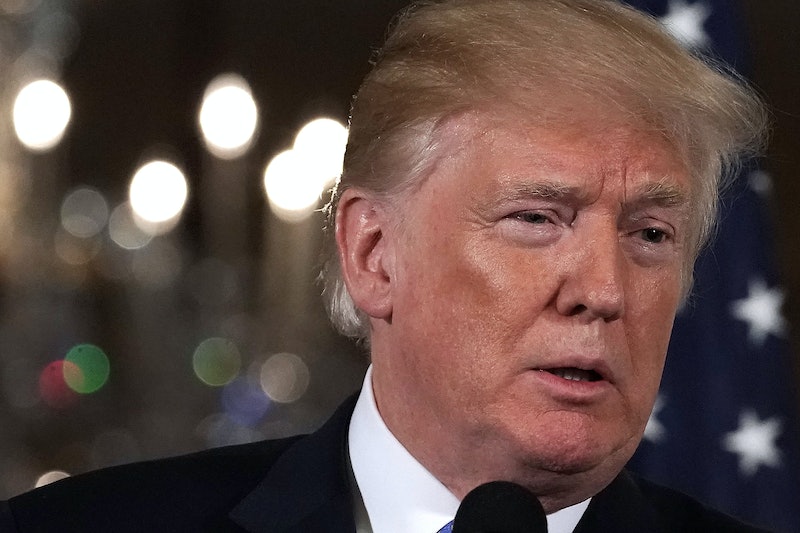 President Trump hosted more than 100 American athletes from the Olympics and Paralympics on Friday, praising their athleticism and success at the 2018 PyeongChang games. Although he had many kind words for the Olympians, at one point, Trump noted that the Paralympics were "tough to watch," and drew widespread criticism in the process.

"What happened with the Paralympics was so incredible and so inspiring to me," Trump said. "And I watched — it's a little tough to watch too much, but I watched as much as I could. It was really fantastic, and I want to thank you."

The Paralympic Games, which take place immediately after the the Olympic Games, are an international event for athletes with various disabilities. The United States had a great year at 2018 Paralympics, bringing home 13 gold medals and 36 medals total — moreso than any other country.

Trump didn't explain why it's "tough to watch too much" of the Paralympics games. However, many on Twitter reacted negatively to his comments. Bustle has reached out to the White House for clarification on his comments.

"The man couldn't be sensitive or respectful if his life depended on it," one user wrote in response. "Gold medal for Malignant Narcicism," another Twitter user said.

"This is shocking behavior from the man who openly and brazenly mocked Serge Kovaleski's arthrogryposis during the primaries," wrote somebody else, referring to a speech wherein Trump made fun of a reporter's physical disabilities.

One person theorized that watching "people with missing limbs [was] too much" for Trump to handle, while another called the president "a disgrace to humanity" for his remarks and suggested that "America is having a hard time watching you."

"Jesus, it just gets worse and worse," another dismayed user reacted.

"A grown man who sits in the oval office and tells paralympians today that 'it's a little tough to watch (the paralympics), but he watched as much as he could'. Who the hell says crap like that??? He is so tone-deaf and obtuse. What an embarrassment," another Twitter critic fumed.

It's standard for the White House to hold a ceremony for Olympians and Paralympians after the games. However, fewer athletes showed up for Trump's celebration on Friday than when President Obama held the same event four years earlier. In 2014, around 200 Olympic and Paralympic athletes joined the Obamas at the White House after the winter games in Sochi, while only 150 athletes came to Trump's ceremony on Friday, according to USA TODAY.

Many of the most celebrated American athletes at the PyeongChang games didn't go to the White House ceremony Friday, including skiers Lindsay Vonn and Gus Kenworthy, snowboarders Shaun White and Chloe Kim, and figure skater Adam Rippon. Several of them, most notably Rippon, Vonn and Kenworthy, made clear ahead of time that they'd be skipping out because they oppose Trump and don't want to be seen celebrating with him.

"I was not going or planning on going," Rippon told USA TODAY. "I have been invited to so many incredible things, to the Human Rights Campaign dinner, the GLAAD Media Awards. I was so honored and so excited to go to those, more so than I would be to go to the White House." He added that it's "important for me to align myself with those people who have the same ideals that I have."

Meanwhile, five winter Olympians — snowboarder Arielle Gold, biathlete Maddie Phaneuf, skiers David Wise, Jessie Diggins, Stacey Cook and — attended the White House on Friday not to celebrate their victories, but to testify in front of Congress about the necessity of tackling climate change. A spokesperson for Protect Our Winters Alliance, the advocacy group the athletes are members of, told USA TODAY in a statement that none of them attended Trump's ceremony while they were in Washington.