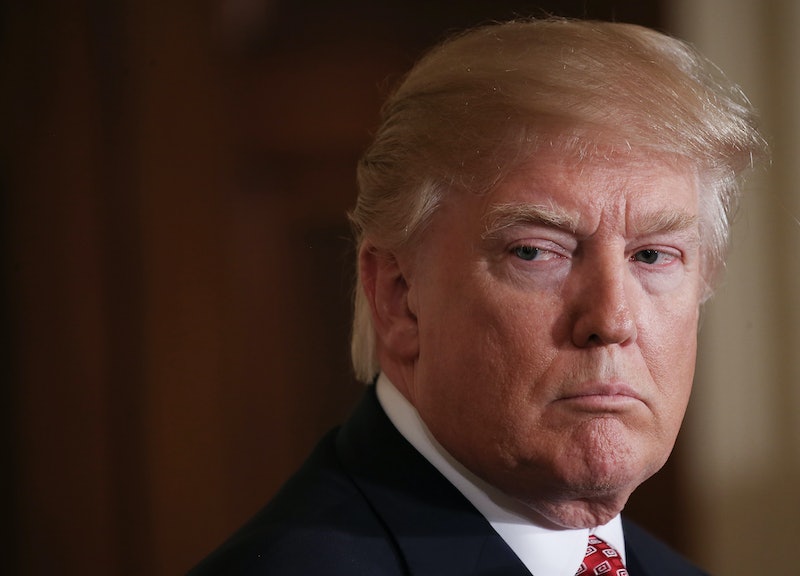 Donald Trump's Thursday press conference was hardly the first time he took the opportunity to bring up the magnitude of his victory in the Electoral College. That and the size of his inauguration day crowds seem to be his favorite subjects. Thursday, however, Trump's quote about his Electoral College win was really something. It's partly what he says, and partly what you as an informed and critically thinking citizen can read between the lines. Putting both together, you get something truly amazing, and incredibly frightening.

Taking a break from the discussion on Russia and leaks to the media, the reporter in question decided to take a step back to address Trump's frequent claims of fake news. "You said today that you had the biggest electoral margins since Ronald Reagan, 300 or more electoral votes. In fact, President Obama about 365 electoral votes," the reporter begins. Trump then cuts the man off, claiming that he was "talking about Republican."

They go back and forth at that point, with the reporter mentioning President Obama again and making reference to George H.W. Bush's electoral vote total in 1988. Bush both won as a Republican after Reagan and had a wider margin of victory than Trump, rendering Trump's claim utterly false from all angles. And yet Trump presses on.

"So why should Americans trust you—" the reporter begins, and Trump cuts him off to say "well no, I was told, I was given that information, I don't know, I was just given, we had a very very big margin."

The reporter then goes on: "My question is why should Americans trust you when you accuse the information you receive for being fake when you provide information that is fake?"

Here's where it gets telling. Trump doesn't try to defend the content of his claim, perhaps because he has absolutely no leg to stand on there. For his answer, he continues with the same logic (or lack thereof) that he used when he cut the reporter off the first time, saying "well, I don't know, I was given that information. I was given — I actually, I've seen that information around. But it was a very substantial victory, do you agree with that?"

There are a number of things to address in that answer. First of all, in a way, the president seems to indirectly acknowledge that he's lying about it. He doesn't directly own up to being wrong, but after the reporter points out the actual truth, Trump attempts to take all responsibility away from himself — not exactly what you'd do if you were confident in what you were saying, right?

Next, Trump's open reliance on the information that he "was given" suggests that he doesn't exactly look critically at the information that he receives. What he's showing, then, is essentially that John Oliver is right about where he gets his facts. He "[sees] that information around" and then repeats it if it suits his vision of himself and the world, giving no thought to whether or not it's actually true. Where did he see that information? It certainly wasn't a reputable source, and it could very well have been a random person on Twitter — he's been known to retweet some pretty dubious sources, likely just because they backed up his position.

Let's not lose sight of all of the other ridiculous and insane stuff that he said at the press conference, but if you just take this instance alone, it's both incredibly telling and incredibly scary. This is a person who's willing to lie, blame other people for his lie, and not spend any energy trying to figure out the truth if he likes the lie. And this is the president. In case you needed any more convincing — this is not a good situation.