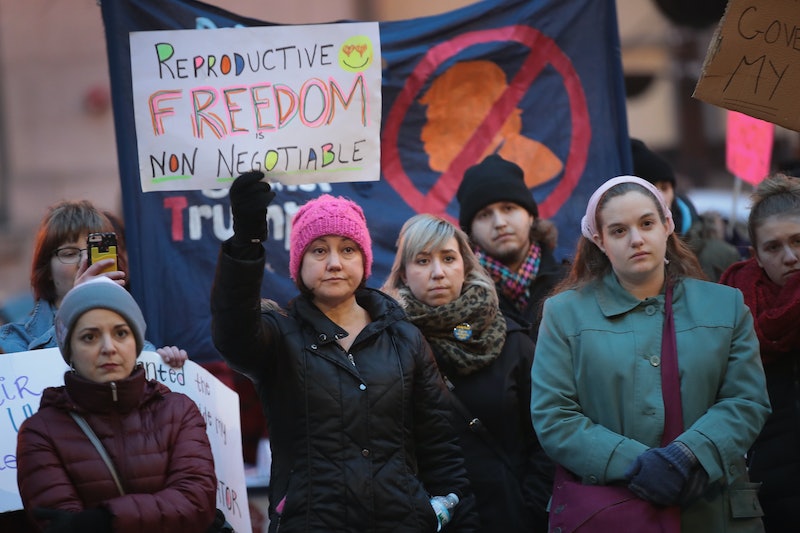 Just after the midterm elections, the Trump administration proposed a major change to how insurance companies process abortion coverage payments — one which opponents are criticizing as a "backdoor ban" on the procedure. The comment period for Trump's proposed abortion coverage rule ends at 5 p.m. ET on Tuesday, which means there is less than 24 hours to let the Department of Health and Human Services (HHS) know how you feel about them.

Essentially, the proposed rule would complicate how abortion coverage is financially processed within state-level Affordable Care Act (ACA) marketplaces. Insurance providers who offer coverage through the ACA would be required to bill their customers separately for their abortion coverage, meaning that, on a practical level, customers would receive two separate bills for their health insurance. One bill would be for their for their basic coverage, and a second bill would be for their abortion care coverage. Opponents to the proposed rule change say that this is an attempt to make it so difficult to pay for abortion care coverage that health insurers would opt out of providing it at all.

"So on the insurance side of things, that means you’re processing claims and processing payments for two separate things," Destiny Lopez, co-director of All* Above All, an organization devoted to maintaining and expanding public abortion insurance coverage tells Bustle. "So it’s a real disincentive to providers to provide abortion care, because we don’t really treat any other health care like that."

States are already allowed to ban insurers providing coverage on the ACA marketplace from including abortion coverage in their plans, according to the Kaiser Family Foundation (KFF). Notably, the nonprofit reports, 26 states already do have a ban on ACA abortion coverage in place, and an additional eight states simply lack plans that include abortion coverage, even without an outright ban.

Providers are also already required to segregate payments associated with abortion coverage — but until now, that hasn't actually translated into a required separate billing process. If the proposed rule change were to go into effect, and if it were to disincentivize insurers from covering abortion care, as pro-choice advocates predict, Lopez confirms that it would likely have a disproportionate effect on low-income women, as well as women of color.

"What we know, even about private insurance coverage, is that it's women of color and low-income women who access this kind of care," she says. "They would be the least likely to afford out of pocket coverage they would need in order to get the care they need."

So, Lopez and other opponents to the proposed rule change are encouraging anyone who wants to fight it to take their comments to HHS. "The more comments you submit, the more they have to read, the longer this process is going to take," she says.

She also encourages abortions rights advocates to call HHS directly, and share their opinions verbally. While HHS is required to read every unique comment they read, Lopez says, picking up the phone could help drive the point home. Additionally, contacting your personal member of Congress, to make sure that they are signing on to all communications headed to the White House, is another important way to make sure that the president and his team hear you loud and clear, Lopez explains.

"To us, this is essentially an attempt to do a backdoor ban on abortion. Placing these regulations on insurers is going to cause confusion among consumers," she says. "And it’s really an attempt by the administration to ban abortion out right and place abortion out of reach."

If the rule change does take effect, pro-choice advocates will do what they can to work with insurance companies to help maintain access to affordable abortion care. But for the next day, it's important to get ahead of the curve, and to let the government know exactly what you think.