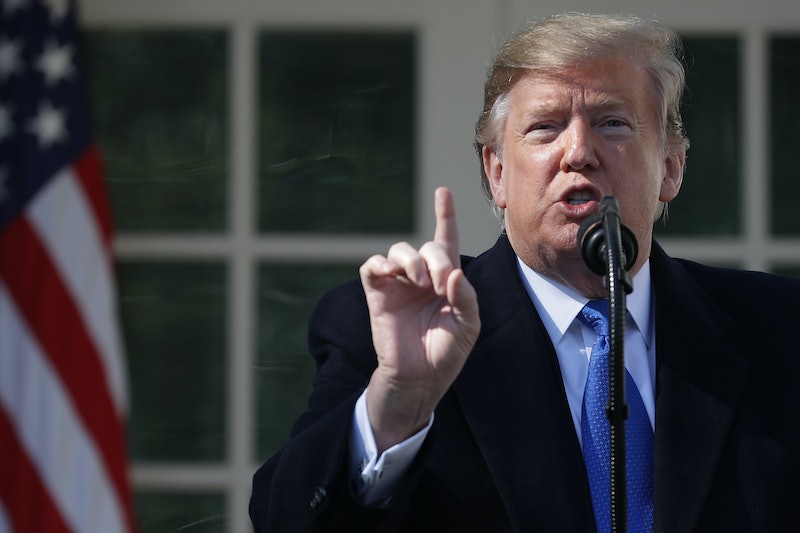 Environmental advocates have had a lot to push back on since Donald Trump took office, including emissions deregulations, removal of wildlife protections, and drilling proposals on protected lands. On Wednesday, another bullet was added to that list, after The Washington Post reported that Trump's proposed climate change panel, tasked with investigating whether climate change impacts national security, would include a climate change skeptic. Bustle has reached out to the White House for comment.

According to The Post, a Feb. 14 memo shows Trump's administration drafted an executive order that would create a 12-member committee led by William Happer, already a senior member of the National Security Council (NSC). Happer, a retired Princeton physics professor with no climate science background, has had controversial views on climate change, at one point arguing that "the demonization of carbon dioxide is just like the demonization of the poor Jews under Hitler," during a CNBC interview.

Climate change is already widely believed to be a national security threat, as reported by groups like the Council on Foreign Relations, and the Pentagon itself. Just a few weeks ago, U.S. intelligence chiefs released a sweeping report contradicting the president's stance that climate change is a "hoax." The report specifically warned about potential national security threats if nothing is done to address the issue, including "threats to public health, historic levels of human displacement, assaults on religious freedom, and the negative effects of environmental degradation."

In November, the annual Congress-mandated National Climate Assessment reported similar threats to infrastructure and economic growth as climate change continues. Asked about the findings by reporters, President Trump categorically denied their validity. "I don't believe it," he said.

According to an NSC memo obtained by The Post, while these national security advisories exist, they "have not undergone a rigorous independent and adversarial scientific peer review to examine the certainties and uncertainties of climate science, as well as implications for national security." Hence, the proposed committee.

Happer's potential role in the proposed panel already has environmental activists worried. "It’s honestly a blunt-force political tool designed to shut the national security community up on climate change," Francesco Femia, co-founder of the Center for Climate and Security, told The Post.

"We’re doing our best to try and counter this myth that CO2 is a dangerous pollutant," Happer said during an energy and climate policy summit sponsored by the conservative Heritage Foundation, according to The Post. "It’s not a pollutant at all ... We should be telling the scientific truth, that more CO2 is actually a benefit to the earth."

Since it isn't official yet, it's unclear the extent to which the panel would be able to influence the president and/or policy decisions, but environmental advocates are unconvinced it will aid in the climate crisis. As Sierra Club Federal Policy Director Melinda Pierce put it in a statement on Wednesday, "Listening to the conclusions of a climate denier on the threats of climate change would be like listening to the Marlboro Man give advice on the dangers of smoking."