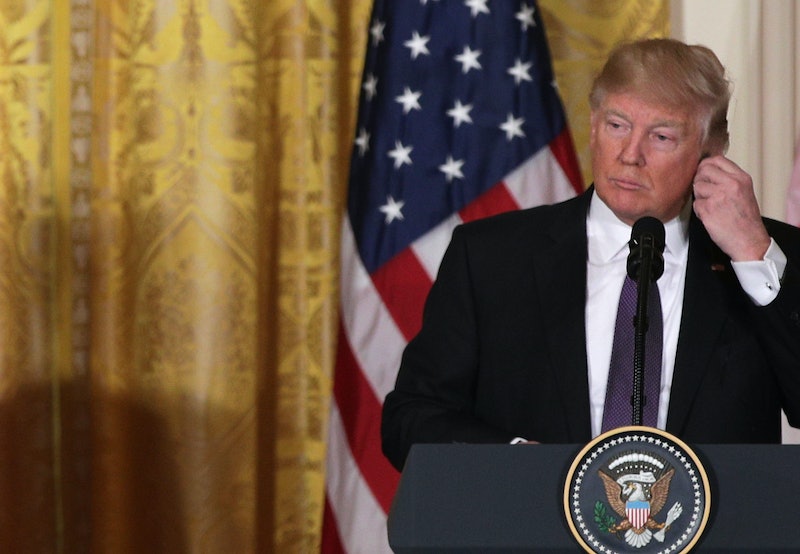 For the second time in 48 hours, President Trump refused to condemn anti-Semitism when asked about the topic on Thursday. Instead, he criticized the Jewish journalist who posed the question to him, telling him to "sit down" and be "quiet." Although the president isn't consistent about very much, this is one topic on which he has been completely consistent, and indeed, Trump's refusal to denounce anti-Semitism is becoming a trademark of his presidency.

"There has been a report out that 48 bomb threats have been made against Jewish centers across the country in the last couple of weeks," Jake Turx of Ami magazine told Trump Thursday. "There are people who committing anti-Semitic acts or threatening to —"

At that point, Trump cut Turx off.

You see, he said that he was going to ask a very simple, easy question, and it's not. It's not. Not a simple question. Not a fair question. Okay, sit down, I understand the rest of your question.

Trump then proclaimed himself "the least anti-Semitic person you have ever met in your entire life," as well as "the least racist person." When Turx attempted to interject, Trump told him to "quiet, quiet," and said that "I hate the charge [of anti-Semitism]."

However, Turx did not accuse of being Trump anti-Semitic, and in fact explicitly stated in his question that "I haven't seen anybody in my community accuse either yourself or anyone of your staff of being anti-Semitic."

It's not the first time Trump has expressed an indifferent attitude toward anti-Semitism. It's not even the first time he did so this week. On Wednesday, when Trump was asked about the rise in anti-Semitic hate crimes since his inauguration, he responded by bragging about his victory in the November election.

"Well, I just want to say that we are, you know, very honored by the victory that we had — 306 electoral college votes," Trump said incorrectly (He received 304 electoral votes). "We were not supposed to crack 220. You know that, right? There was no way to 221, but then they said there's no way to 270. And there's tremendous enthusiasm out there." He went on to reference the fact that he has "so many friends" who are Jewish, and added cryptically that "you're going to see a lot of love" under his administration.

Trump has had many opportunities to take a stand against anti-Jewish sentiment, and he has refused them. Before the election, Trump was asked what he would say to the supporters of his who reportedly sent anti-Semitic hate mail to Jewish journalist Julia Ioffe.

"I don't have a message to the fans," Trump replied meekly. Reacting to Trump's comments, the founder of the neo-Nazi website Stormfront said that "we interpret that as an endorsement," according to the Huffington Post. At another point in the campaign, Trump refused to denounce former Ku Klux Klan leader David Duke; a week before the election, the KKK's official newspaper endorsed Trump.

Every president has to walk difficult rhetorical lines with regard to certain issues. This is not one of those issues. On the list of things a president is expected to do as a basic matter of competence, denouncing racism is just about the easiest. It requires no talent, planning, or effort; all Trump needed to do was say, "I condemn anti-Semitism and all anti-Semitic hate crimes." That's it.

But he didn't say that. Instead, he interrupted the Jewish reporter who dared ask the question, told him to be quiet and sit down, and depicted himself as the real victim.