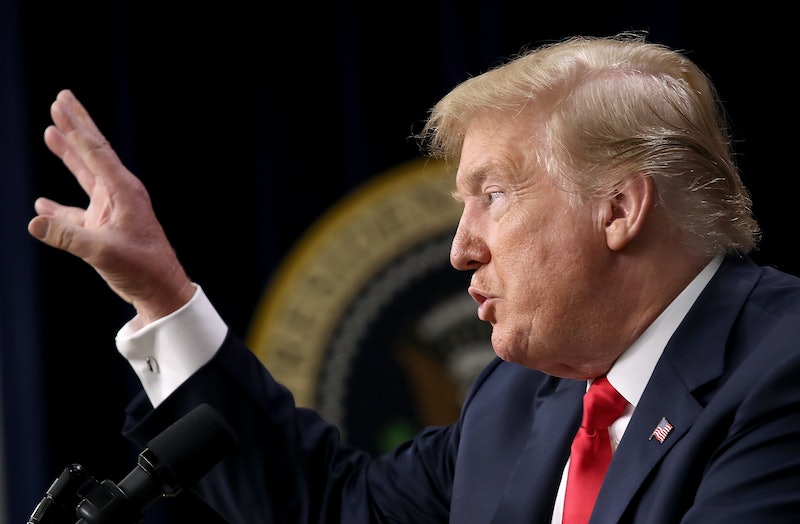 At a campaign rally for Rep. Kevin Cramer (R-SD) in Fargo, North Dakota on Wednesday evening, Trump's response to Anthony Kennedy retiring reflected both pride and excitement. To the crowd, Trump claimed that Kennedy's decision to retire during his presidency was a virtual act of trust in Trump's ability to pick a great nominee to replace him. "He felt confident in me to make the right choice and carry on his great legacy, that's why he did it," Trump explained.

Justice Kennedy announced his retirement on Wednesday morning, and it will be effective July 31. Kennedy's vacancy will open up an incredibly crucial seat on the Supreme Court: if Trump fills the seat with another conservative, the bench will have five staunch conservatives who could impact legislation for generations.

According to NBC 2, Trump seemed to understand the gravity of the situation on Wednesday evening, and wanted the crowd to know that the issue of a Supreme Court appointment "makes the issue of Senate control one of the vital issues of our time."

Trump added, "Democrats want judges who will rewrite the Constitution any way they can do it, and take away your Second Amendment, erase your borders, throw open your jailhouse doors and destroy your freedoms." He finished by telling the crowd, "We must elect more Republicans — we have to do that."

Earlier in the day, Trump gave an official statement on Kennedy's decision to retire to reporters in the Oval Office (as seen in the video above.)

True to his word, Trump authorized the release of a list of 25 names that the administration would be considering during the nomination process.

If you don't fully get why Democrats are flipping out about this Supreme Court nomination, especially given how much momentum the Democratic party has been generating as midterms approach, this explanation by Ezra Klein of Vox pretty much sums the situation up:

Democrats have won the popular vote in six of the past seven presidential elections, but conservatives continue to dominate the Supreme Court, and they are using that dominance to weaken Democrats politically: from Bush v. Gore to Citizens United to Wednesday’s Janus decision weakening public-sector unions to the gutting of the Voting Rights Act to the refusal to curb gerrymandering, Republicans are using their control of the Supreme Court to buttress their waning numbers nationally.

In other words, all of the largest decisions about how this country will run (from what type of immigrants will be allowed to enter the country, to whether or not same-sex couples should be given the same rights as heterosexual couples, to whether a woman should be in control of her reproductive future) come down to the Supreme Court. Not the president, or the Senate, or the House of Representatives.

If and when Trump's nominee is elected to the bench, there's a possibility that Roe v. Wade, the landmark legislative case that declared a woman's right to accessing legal and safe abortions, will be overturned, according to CNN, and further confirmed by The Hill.

If this is something that you're fully not okay with, then the one thing you can do above anything else is to make sure to get as many people as possible to turn out and vote for the 2018 midterm elections.