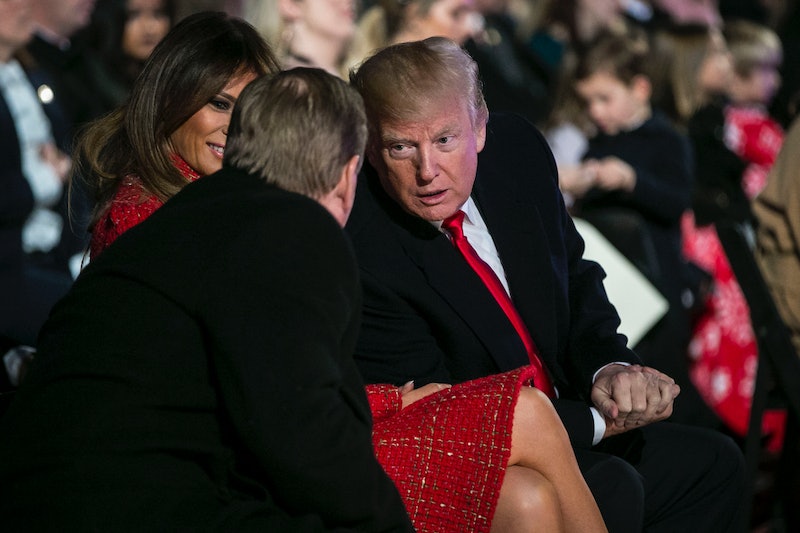 President Trump and First Lady Melania Trump continued their family tradition of attending a public Christmas Eve midnight mass at an Episcopal church in Florida, but the message of this year's sermon may have been a little more personal than they had expected. In fact, the reverend seemed to be speaking directly to Trump in his Christmas sermon by focusing the homily on the power of words.

Rev. James Harlan at the Episcopal Church of Bethesda-By-The-Sea in Palm Beach, Florida, which the Trumps have been attending for decades, began his sermon with a quote from Nelson Mandela that explains just how "precious" words are.

"It is never my custom to use words lightly," the quote begins.

If 27 years in prison have done anything to us, it was to use the silence of solitude to make us understand how precious words are and how real speech is in its impact on the way people live and die.

Harlan went on to note the "destructive and divisive potential" that words can have if manipulated or used improperly.

Many people pointed out that the sermon could have been a direct message to President Trump, who has often been criticized — even by his supporters — for being too rash when sending messages to the American people, especially through his Twitter account.

Over the course of his first year in office, the president has not exactly been careful with his words — sometimes even at the expense of national security. Although tensions have been high between the Trump administration and North Korea, Trump has insisted on making inflammatory remarks about the isolationist regime that don't appear to be planned or well-thought-out.

In an off-the-cuff remark in August, Trump threatened to unleash "fire and fury like the world has never seen" if North Korea didn't stop testing nuclear weapons. And in November, Trump tweeted that North Korean leader Kim Jong-un is "short and fat."

Trump has also generated controversy for using a racially charged epithet to describe Sen. Elizabeth Warren; claiming that "both sides" were to blame for the violence perpetrated by white supremacists in Charlottesville, Virginia; and openly telling NBC's Lester Holt that he thinks the Russia investigation is "a made up story." Trump even unleashed a Twitter tirade on Christmas Eve, using the holiday to criticize the "Fake News" media.

The Fake News refuses to talk about how Big and how Strong our BASE is. They show Fake Polls just like they report Fake News.

The President also retweeted an image that depicted the CNN logo squashed beneath his feet later in the day.

The Trumps have an intimate history with the Bethesda-By-The-Sea Church. The Church is just a five-minute drive from Trump's Mar-a-Lago golf resort, where he spends much of his free time. President Trump married his wife Melania at the church in 2005, and their son Baron was christened there the following year.

The family has frequently attended Christmas Eve and Easter services at the Church, and this year was no exception, despite the family's new official role. The Palm Beach Post reports that at this year's service, churchgoers occasionally snapped photos of the First Family throughout the service until being asked to stop by ushers and Secret Service members.

It can't be known for sure if Rev. Harlan's Christmas Eve message really was directed at Trump, but a gentle reminder about the potential of words to either create destruction or give hope is certainly something that would be nice for the president — and all of us, for that matter — to take into account moving into the new year.