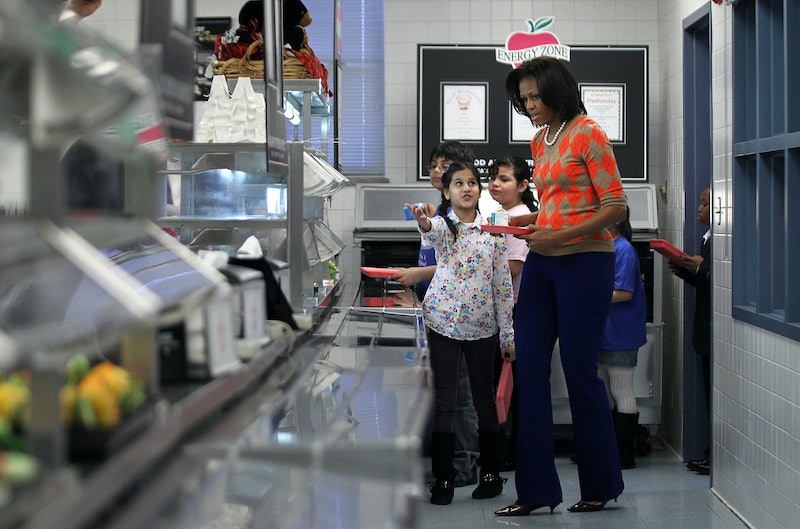 The Trump administration is being taken to court over its rollback of Michelle Obama's school lunch guidelines. A lawsuit against the administration was filed by six states and Washington, D.C., in the New York Southern District Court on Wednesday, The Hill reported, over the rollback that took place in December 2018.

According to the complaint, the plaintiffs said that their reason for the lawsuit is "to protect the health of the schoolchildren in their States by ensuring that nutritional standards for school meals are not changed without an opportunity to comment on the changes and that, as required by Congress, the standards are based on the Dietary Guidelines for Americans, the recommendations of the National Academy of Sciences, and scientific research regarding children’s nutrition."

The lawsuit refers to nutritional standards championed by the former first lady in 2010, which were primarily focused on regulating the amount of sodium used in school lunch meals. The Obama-era lunch nutrition standards also encouraged schools to introduce more grains into the students' meals.

The Hill noted that the Department of Agriculture declined to comment on the lawsuit, citing its policy of not publicly discussing ongoing cases.

In a statement about the suit, New York's attorney general said that the administration "deliberately" disregarded science when it rolled back the guidelines.

"Over a million children in New York — especially those in low-income communities and communities of color — depend on the meals served daily by their schools to be healthy, nutritious, and prepare them for learning," James said. "The Trump Administration has undermined key health benefits for our children — standards for salt and whole grains in school meals — with deliberate disregard for science, expert opinion, and the law. My office will use every tool at our disposal to fight back against these shameful rollbacks and ensure our children our protected."

On Wednesday, the Center for Science in the Public Interest and the Healthy School Food Maryland also filed a lawsuit against the administration over this rollback of school lunch guidelines.

In 2018, Perdue expressed support for the administration's rollback of those nutritional guidelines by suggesting that the former first lady's approach enabled picky eaters. Perdue's rationale was published on the Department of Agriculture's website where he stated: "Schools need flexibility in menu planning so they can serve nutritious and appealing meals. ... Schools want to offer food that students actually want to eat. It doesn’t do any good to serve nutritious meals if they wind up in the trash can."

Perdue's statement seems to contradict what researchers have presented in their studies of the Obama-era nutritional guidelines, however. In fact, University of California Berkeley and Yale scholars noted in the United States National Library of Medicine that while the Obama-era lunch standards took some getting used to, they ultimately led to students voluntarily eating more veggies and grains, and less fat.