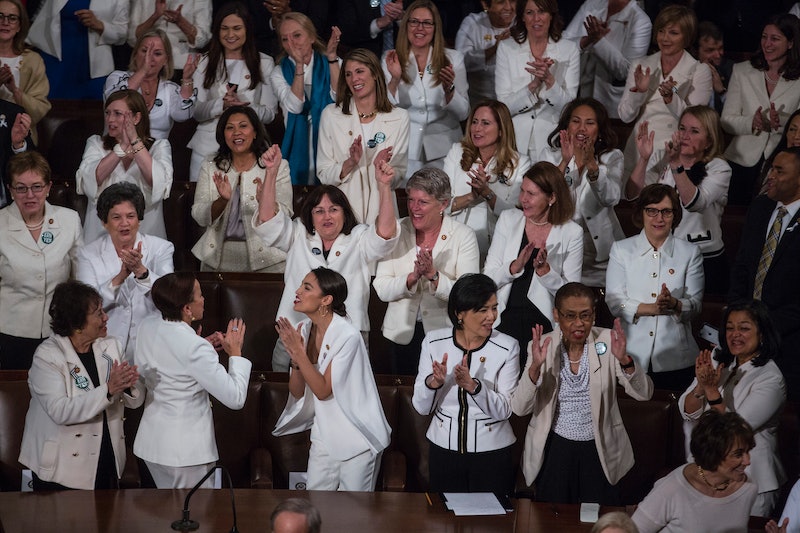 President Donald Trump delivered his second State of the Union (SOTU) address on Tuesday evening. The president covered a wide range of topics during his remarks, including making several shoutouts to women during his speech. Indeed, some of Trump's SOTU comments about women drew an enthusiastic response from the crowd — and taking a closer look at what he said will help explain their reaction.

Many women lawmakers stood out in the crowd as they attended Trump's SOTU address, as they opted to wear "suffragette white" to represent their commitment to women's issues, HuffPost reported. Women from both parties were invited to wear the color to the president's address by the House Democratic Women’s Working Group.

One of the more stand-out moments from Trump's speech came as he gave shoutouts to some of women's recent achievements. Vox reported that, as Trump described some of these accomplishments, many women (mostly Democratic representatives who generally oppose his policies) began to stand up and cheer to celebrate their achievements. The outlet noted that some in the chamber also began chanting, "USA! USA!" as the president touted women's successes. The celebratory women made an especially striking visual statement as they stood and applauded in their white outfits in the House chamber, Vox noted.

If you're curious as to what exactly prompted such an enthusiastic response from these lawmakers, the list below highlights Trump's various shoutouts to women during his second State of the Union address.