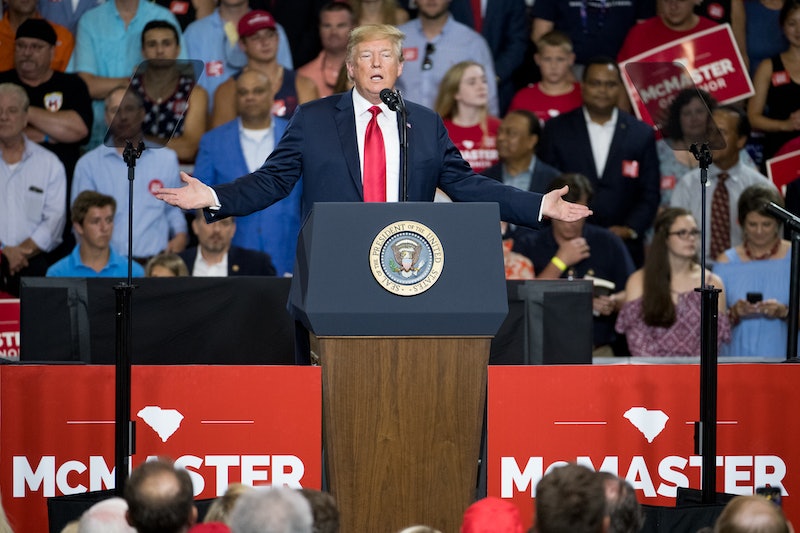 There are several things the public may have learned from the border crisis under President Trump's zero tolerance immigration policy: where detention centers are located, the conditions inside, and how children are treated. But for the president, the big takeaway is that under his watch, the detention facilities are nicer. On Monday night, at a South Carolina rally, Trump bragged migrant detention centers are "better" than under Obama and his administrative oversight, according to CNN.

Trump, who was in Columbia to stump for Governor Henry McMaster in the Republican primary, compared images released by his administration with photos from 2014, during President Obama's term, that have been publicly shared over the past weeks, CNN reported.

"What I learned was one thing: Our facilities are cleaner, better kept and better run. That's the one thing I learned," the president said, before going on a rant against Democrats. "The Democrats want to protect illegals coming into this country, some of whom are not good. Some of whom cause lots of problems in the worst possible way. They want to protect illegals coming into the country much more so than they want to protect you and that's not where we're coming from, OK? The Democrats want open borders, and they don't mind crime."

The Trump administration's zero-tolerance policy separated migrant children from their families after they were caught crossing the United States' southern border. The practice has sparked widespread outrage and led to protests across the nation, according to Slate. Public anger only grew as pictures, and even audio, trickled out of detention centers.

In the face of fierce pressure from both Republicans and Democrats, President Trump signed an executive order on Wednesday, ending his administration's policy of separating migrant children from their parents. The order, according to NPR, essentially mandates that family separation be replaced with the detention of whole families together. The executive order came despite the president's earlier argument against keeping families together, in which he had argued that "you can't do it by executive order," NPR reported.

But though Trump praised the quality of the facilities, not everyone is convinced. Lawmakers and journalists have had a tough time getting inside, and the government has only allowed a handful of tours, with journalists barred from recording anything, according to CNN. One lawmaker from California has described detention facility conditions as "deplorable."

A CBS News correspondent managed to gain access to a detention center in Homestead, Florida. The correspondent, Mark Strassman, was able to walk around for about an hour but was escorted the entire time and restricted from talking with the more than 1,000 children who were detained there. Strassman described the center as "a very rough-looking community college," with boys and girls mostly kept separately.

Over the weekend, Senator Elizabeth Warren traveled to McAllen, Texas, to visit an immigration detention center. Warren described the children she saw, including a 6-month-old baby, to a group of reporters around her. "Little girls who are 12 years old who are taken away from the rest of their families or held separately," said Warren. "They're all on concrete floors in cages. There's just no other way to describe it. They're big chain link cages on cold concrete floors and metal blankets handed out to people."

The pictures coming out of the detention centers are strictly controlled by the Trump administration, CNN reported. Newsroom can either use what Customs and Border Patrol officials give them or go completely without. Unlike The Washington Post, CNN, and other news organizations, The New York Times notably chose to go without.

"The New York Times decided as a newsroom not to publish the government handout photos of the border shelters where migrants are being held, because news photographers were not allowed in," The New York Times said in a statement to CNN.

Trump's claims that the detention centers are "better kept" and "better run" under his watch may very well be true. But until reporters can independently record and document the conditions inside, the president will likely continue to deal with a large swath of skeptics.