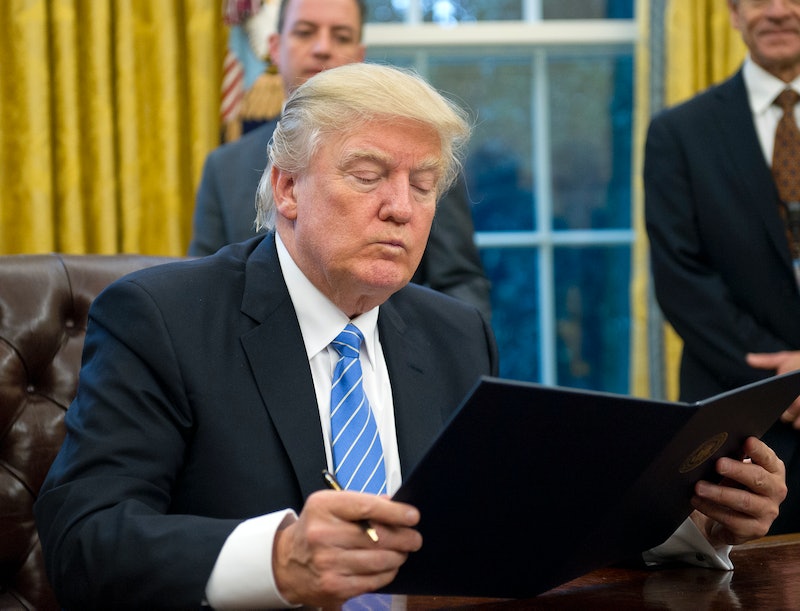 As you probably already know, Donald Trump isn't the world's biggest bookworm. Upon taking office, Trump has remained consistent about not doing much reading himself and, according to Politico, allowing his staff to keep him updated about the ongoings in the world of the published word. In one such instance, Trump's staff slipped him a fake Time magazine cover predicting an imminent ice age. The cover was reportedly shared by K.T. McFarland, deputy national security adviser, according to Time.

Trump is fairly unabashed about his light reading appetite. He's previously admitted to not reading a bunch because he apparently comes to wise conclusions "with very little knowledge other than the knowledge I [already] had, plus the words ‘common sense,’ because I have a lot of common sense and I have a lot of business ability." But for someone with a "a lot of common sense," Trump still didn't manage to spot the fact that the Time magazine cover handed to him was obviously a hoax.

Politico noted that the White House "staff chased down the truth and intervened before Trump tweeted or talked publicly about" the 1970s cover. The report painted an impossibly bizarre picture of affairs within the White House, where the president maintains a rather free flow of information in and out of the Oval Office. It seems as if anyone with an internet connection and an ink cartridge for their printer can simply slip whatever they please into Trump's view. This has severe implications given the magnitude of Trump's position and the power he has because of it.

Look, it's easy to mistake a doctored article or image online for a real one. The internet is rampant with unsubstantiated claims and heavily edited photos that can lead the most agile reader onto the embarrassing terrain of falsehoods.

But, while the internet is covered with fake news, the person being discussed here is the president of the United States of America. The most powerful country on earth. Furthermore, this is an individual with a seemingly personal vendetta against the purported "fake news" industry.

So, in other words, the deputy national security adviser to the president of the world's most powerful country handed him a printed version of an internet hoax. It would've been hilarious if it was a work of fiction, like the Time cover itself, but this is the unsettling reality we live in at the moment.