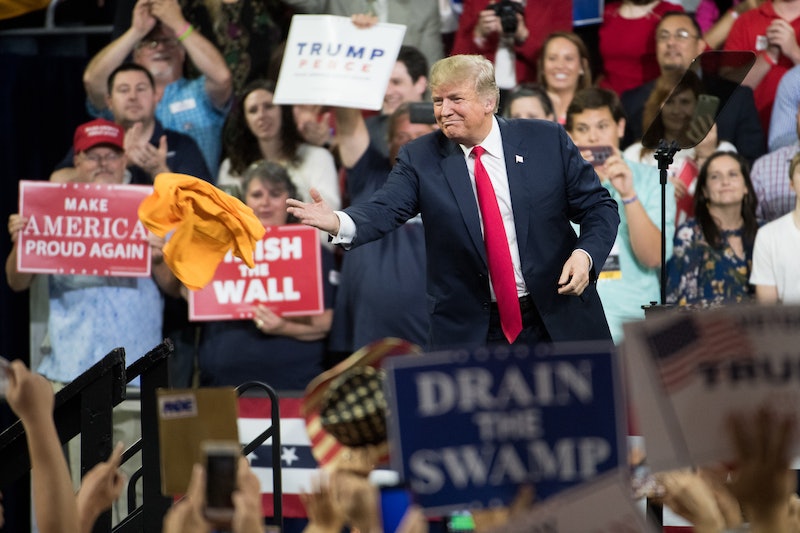 The president was out on Monday stumping for the Republican party ahead of the midterm elections. But instead of zoning in on those upcoming November elections, Trump's Tennessee rally ended up mocking Democrats who could very well become his competition in the 2020 presidential election, according to USA Today.

“The Democrats can no longer be trusted with your power,” Trump said, according to The New York Times. "They have moved so far left that ‘Pocahontas’ is considered a conservative."

"Pocahontas" is a derisive name Trump has used in the past for Warren, a term that Native American groups have deemed racist, The Hill reported. Warren has said she has Native American heritage and that she is "very proud of it."

Trump also spent some time criticizing former Vice President Joe Biden. “We call him ‘one percent Biden,’” Trump said, according to USA Today. “Until Obama took him off the trash heap, he couldn’t do anything.”

Trump also jeered at Biden for a remark that the former VP had made in March on sexual assault, saying that if the two were in high school, Biden would take Trump behind the gym and "beat the hell out of him."

Trump then moved on to Booker, whom he described as someone who "ran Newark, New Jersey, into the ground," according to USA Today. Trump continued to disparage the senator, highlighting something Booker had written in 1992 in The Stanford Daily, Stanford University's campus newspaper. In the piece, Booker described his high school effort at "stealing second," in which he recounted being a 15-year-old trying to touch a girl's breast as they kissed at a party. Booker had voluntarily shared the groping incident to show a transformation of his views on sexual consent and respect during his college years, The Washington Post noted.

“And then you have Cory Booker, who destroyed Newark,” Mr. Trump said. “Seeing some of the things he wrote when he was young about women — take a look, OK?”

Trump's back-and-forth with these potential 2020 presidential candidates has played out since his campaign days. In July, Warren shot back at Trump after he insulted her at a Montana rally.

"While you obsess over my genes, your Admin is conducting DNA tests on little kids because you ripped them from their mamas & you are too incompetent to reunite them in time to meet a court order," Warren wrote on Twitter. "Maybe you should focus on fixing the lives you're destroying."

As the midterms approach, Trump is only expected to ramp up his support for the GOP. The president is expected to hold three more rallies around the nation this week, ahead of what many are expecting to be tough elections for Republicans looking to keep their hold on Congress.