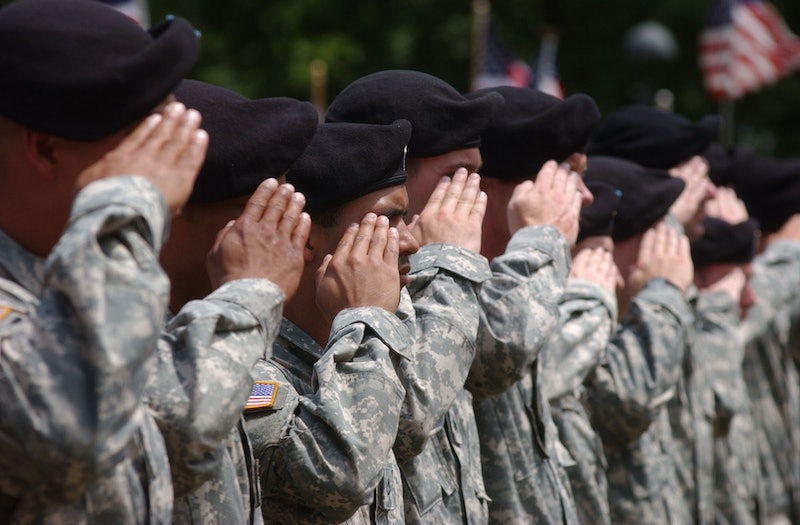 Trump announced the ban last month via Twitter, but it wasn't clear at the time what, if anything, would come from his statement. The Pentagon said that it had not received any guidance from the White House at the time that Trump made his statement, so it seemed like it might have been an empty promise — until now.

The Hill reported that under the Pentagon's new policy, Defense Secretary James Mattis would judge a service member's readiness for deployment when making the decision to remove them from the military. A 2016 study commissioned by the Pentagon revealed that there may be as many as about 10,800 transgender individuals serving in the U.S. military, up to 6,630 active duty members and 4,160 reservists. A strict enforcement of a ban could be crippling for strategic support throughout the military.

Furthermore, Trump's claims about the reasoning for the ban appear to be false. He cited the "tremendous medical costs" that come from having transgender people in the military, but the Pentagon study found that on average, less than 100 transgender service members per year seek transition-relation health coverage that could affect their readiness for deployment. According to the Associated Press, that would cost the Department of Defense a maximum of $8.4 million per year, only 0.0014 percent of the department's annual budget of $600 billion. For contrast, the Pentagon spends 10 times more on erectile dysfunction medication than transgender health costs.

The decision to move forward with the ban in undoubtedly going to cause resistance from pro-LGBT rights activists, who have criticized Trump for allegedly breaking his promise to fight for the LGBT community. And while support for LGBT rights once split more evenly along party lines, Trump's own base isn't especially consolidated on this issue. According to the nonprofit organization Vote Vets, 86 percent of Democrats and 48 percent of Republicans support allowing transgender individuals to serve in the military if they can do the job.

Chasing after the unpopular policy is a confounding move for the Trump administration, particularly with both foreign conflicts and domestic unrest escalating in recent weeks.