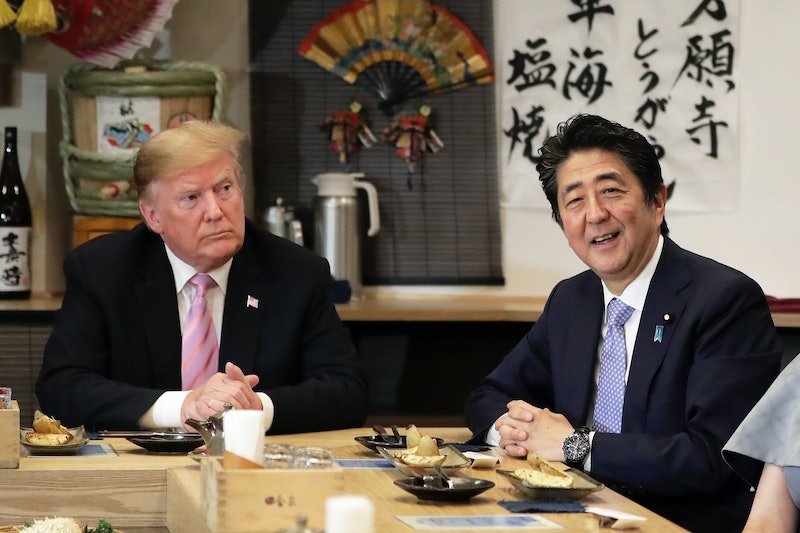 In his first state visit to Japan since Emperor Naruhito ascended to the Chrysanthemum Throne at the beginning of May, President Donald Trump has so far enjoyed a tourist's day of cultural and culinary delights. Burgers followed a round of golf — and a selfie — with Prime Minister Shinzo Abe before a traditional Japanese barbecue dinner. Trump's trip to Japan also included a sumo wrestling tournament, where the president stepped into the ring to award a massive trophy he'd had made just for the occasion.

"That was an incredible evening at sumo," The New York Times reported the president said when summarizing his day to reporters. "We brought that beautiful trophy, which you'll have hopefully for many hundreds of years."

After watching five sumo matches alongside Abe and First Lady Melania Trump at Ryogoku Kokugikan stadium in Tokyo on Sunday, Trump entered the ring, which is known as the dohyo, to award the "President's Cup" he'd brought. With the help of a sumo official, Trump hefted his gleaming trophy, which The Washington Post has reported clocked in at 4 and 1/2 feet and more than 60 pounds and featured a spread-winged eagle, into the arms of tournament victor Asanoyama.

"In honor of your outstanding achievement as sumo grand champion, I hereby award you the President’s Cup," the paper reported the president said.

On Twitter, the president thanked the Japanese prime minister for "a great time," adding it had been his honor to present his "President's Cup" award. "Tonight in Tokyo, Japan at the Ryōgoku Kokugikan Stadium, it was my great honor to present the first-ever U.S. President's Cup to Sumo Grand Champion Asanoyama," Trump tweeted. "Congratulations! A great time had by all."

But according to reports from both The New York Times and The Washington Post, Trump's presence at Sunday's tournament forced sumo officials to make a few exceptions to the sport's many strict rules. Both papers reported the president and first lady watched the evening's matches from chairs placed about five rows away from the dohyo — a break from the sport's tradition of seating spectators around the ring on floor cushions. According to The Washington Post, chairs are normally allowed only on the stadium's second floor.

Of course, Trump's stint in the sumo ring on Sunday was a far cry from the antics he pulled in the ring more than a decade ago during his World Wrestling Entertainment (WWE) days. The Trump in Tokyo was significantly more subdued than the Trump who clotheslined WWE's Vince McMahon during a scripted Battle of the Billionaires match in 2007.

After a day of playing the tourist, Trump's state visit to Japan turned more toward policy on Monday, NPR reported. The president held a joint press conference with Abe followed by a state banquet hosted by Emperor Naruhito and Empress Masako. Trump is expected to continue his trip on Tuesday with a visit to the port of Yokosuka on Tokyo Bay, where both U.S. and Japanese warships are currently harbored.

More like this
Jude Bellingham’s Superstar Football Talent Runs In The Family
By Maxine Harrison
What To Know About Martin Bashir After Watching 'The Crown'
By Bustle UK
The David Beckham Qatar Controversy, Explained
By Sophie McEvoy
Read Dan Levy's Heartbreaking Message After The Club Q Shooting
By Stephanie Topacio Long
Get Even More From Bustle — Sign Up For The Newsletter