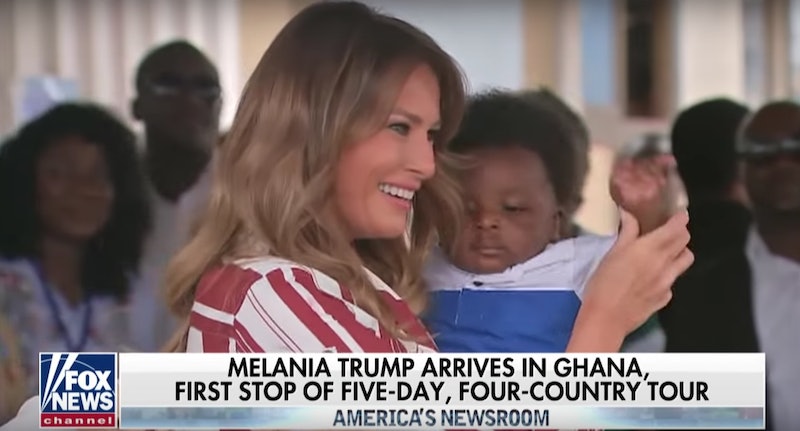 Melania Trump arrived in Ghana on Tuesday for what will be a weeklong trip to Africa and her first solo trip abroad as first lady. President Trump tweeted about Melania visiting Ghana shortly after she arrived and said he's "proud" of her, though many noted that Donald's policies and past comments regarding Africa could put the first lady in a tight spot during her trip.

"Proud of our great First Lady - and she loves doing this!," the president wrote in response to a picture of Melania that New York Times photographer Doug Mills posted. The image, according to Mills, depicts the first lady holding a six-month-old baby the Greater Accra Regional Hospital in Accra. Mills added that she "handed out teddy bears and Be Best-themed blankets donated by the White House to young children and their mothers" during her visit.

Some argued that Melania's trip to Africa put her an awkward position, given the disparaging comments her husband has reportedly made about the continent. CNN reported in January that, during a conversation about African immigration to the U.S., Donald asked members of his cabinet why America wants "all these people from sh*thole countries coming here." The president publicly denied the report; however, he defended the comments privately, according to the Associated Press, and was condemned by the United Nations and the African Union for his reported word choice.

As a result, Melania is in the uncomfortable position of having to mend relationships between the U.S. and African countries during her trip, some experts said — a potentially Herculean task.

"She's got some heavy lifting to do on this trip and it's a little bit unfair because that's not what a first lady's trip should be about," Judd Devermont, the Africa program director at the Center for Strategic and International Studies, told the Associated Press. Bustle has reached out to the White House for comment on Donald's reaction to Melania's trip.

Others noted that some aspects of Melania's visit appeared at odds with the policies of her husband's administration. According to the Washington Post, several stops during her trip will highlight the USAID program, which largely exists to aid Africa; however, Donald has proposed deep cuts to USAID. The first lady is also planning on touring a elephant and rhino conservatory when she visits Kenya later in the week — despite the fact that Donald has lifted restrictions on imported elephant trophies from Africa.

Melania's spokesperson Stephanie Grisham told the Washington Post that “Africa remains a priority for this administration, and I believe the first lady’s trip through the continent will showcase just that."

After visiting Ghana Ghana, Melania will go to Malawi, Kenya, and Egypt during her visit. In a press release a week before Melania's trip, the White House said that she will "focus on maternal and newborn care in hospitals, education for children, the deep culture and history woven into each African country, and how the United States is supporting each country on its journey to self-reliance."