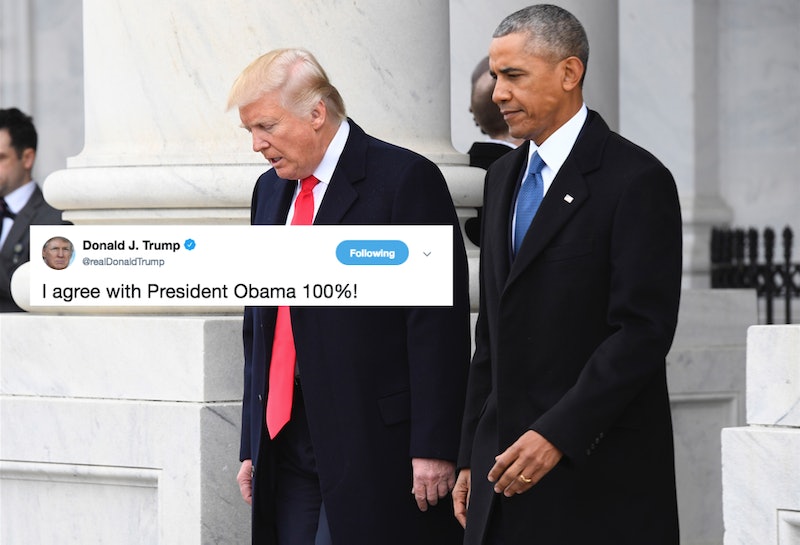 POTUS has proven to be a man capable of constant surprises, but it's especially shocking to see him agree in any capacity with his predecessor, Barack Obama. On Tuesday, he did just that: Donald Trump's tweet about Obama condemning illegal immigration simply said, "I agree with President Obama 100%!" It's totally possible that Trump's comment was intended to be tongue-in-cheek, but still — it's not every day that you see Trump say he's on the same page with Obama on anything.

Trump was referencing a video that captured a speech Obama made on the Senate floor in 2006, two years before he became president. In the speech, Obama said,

Those who enter the country illegally, and those who employ them, disrespect the rule of law, and they are showing disregard for those who are following the law. We simply cannot allow people to pour into the United States undetected, undocumented, unchecked and circumventing the line of people who are waiting patiently, diligently, and lawfully to become immigrants in this country.

Though Trump has been critical of most aspects of the Obama administration for a long time now, he actually does have a history of recognizing the work that Obama did to curb illegal immigration.

It's true: the Obama administration deported over 2.7 million people from 2009 to 2016, more than any other administration in history. What's more, in Trump's first year of office, the overall number of deportations was lower than the year before (which was Obama's last year in office). This distinction is largely due to a decline in people crossing the border without papers from 2016 to 2017.

But that doesn't mean that Obama and Trump had similar programs regarding immigration, or that Obama has been supportive of Trump's policies. In June, Obama gave a sharp criticism of Trump's controversial family separation policy at the U.S.-Mexico border.

In a Facebook post for World Refugee Day, he wrote, "Are we a nation that accepts the cruelty of ripping children from their parents’ arms, or are we a nation that values families, and works to keep them together? Do we look away, or do we choose to see something of ourselves and our children?"

As a point of defense, the Trump administration tried to claim that the "zero tolerance immigration policy" being implemented was the same one implemented under the administrations of Obama and George W. Bush.

This was a misleading comparison: although both of those former administrations did have their own version of a "zero tolerance" policy, the Trump administration was the only one to have a policy set in place to separate parents from children.

Trump's tweet agreeing with Obama comes at a particularly rife moment for the Trump administration, regarding immigration policy: in the last week, Trump has been navigating how to deal with the migrant caravan of thousands of Central Americans trying to move through the U.S.-Mexico border and seek asylum.

One of the more recent and concrete plans that Trump offered up as a solution to the caravan is to cut off the three Central American countries from which the migrants originate from: Honduras, El Salvador, and Guatemala. It's not clear how, exactly, he wants to cut off those countries, or what payments he was referencing specifically.