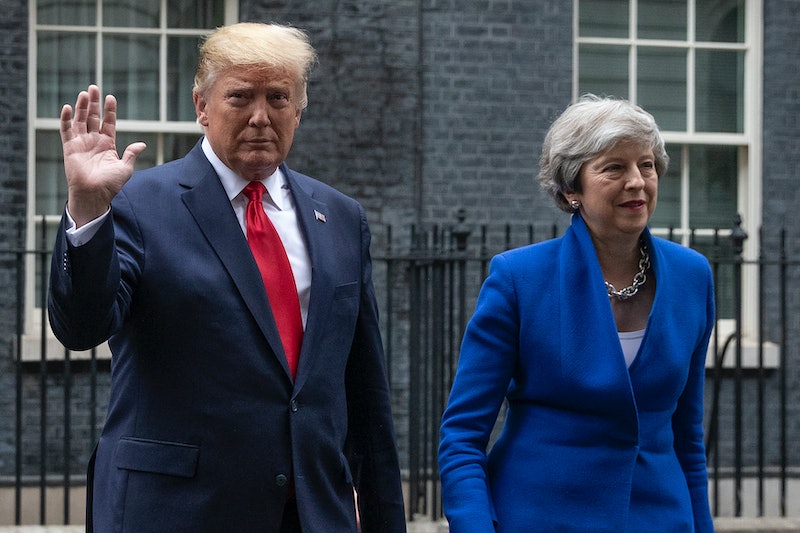 Traveling abroad isn't cheap for anyone, let alone the POTUS and all of his adult children. According to some early reports, Trump's UK visit cost taxpayers more than $3 million. Quartz attributes the bulk of the price tag to a combination of hotel stays, using Air Force One, and IT support.

The president traveled to the UK with not only all of his adult children, but also an extensive entourage, Politico reports. Those in attendance include a number of the president's personal friends, as well as what Politico describes as "a swollen group of administration officials."

The Mirror estimates that Trump's visit will actually cost UK taxpayers somewhere in the vicinity of $50 million. According to the paper, the president is traveling with about 1,000 people. Part of the reason that the trip will cost his host country so much money has to do with security, as well as managing various protests scheduled during his visit, according to Newsweek.

The Trumps and their associates are enjoying a trip replete with luxury, according to reports. Quartz reports that $1.3 million worth of hotel costs will cover a stay at the Intercontinental Park Lane Hotel, for example. The hotel is nestled between Buckingham Palace and Hyde Park, per Quartz.

An estimated $1.1 million will be spent on other various London hotels, per Quartz. Although sometimes heads of states will host foreign dignitaries, that was not the case for this trip across the pond, according to reports. Previously, Presidents George W. Bush and Barack Obama stayed at the famous palace during their own respective state visits, per Town & Country.

But, Buckingham Palace wasn't quite ready for such an array of important guests. The magazine reports that the royal residence is currently undergoing extensive renovations that are expected to take about a decade to complete. Such a massive project has made the palace inhospitable to Trump and his entourage, reports Town & Country.

Aside from accommodations, the travel itself can also rack up quite a hefty price tag. Per Quartz, the round trip overseas on Air Force One cost more than $2 million. The outlet reports that operating Air Force One costs about $142,380 per hour. Those who traveled on the airplane included the president, as well as a litany of advisers and other government officials, per Quartz.

When Trump leaves the UK, he will stop in Ireland, Newsweek reports. As was the case in the UK, Irish taxpayers will also foot a significant bill, partially to help keep President Trump safe. Newsweek reports that it will cost the host country about $11.25 million to host the U.S. president.

Information security will also come at a price. Per Quartz, the U.S. is spending around $200,000 on various IT costs, presumably to bolster communication and data security while the first family is in town. Suffice to say that traveling overseas costs the president, as well as his entourage, more than it does for the average person. As is generally the case, taxpayers will be footing the bill.