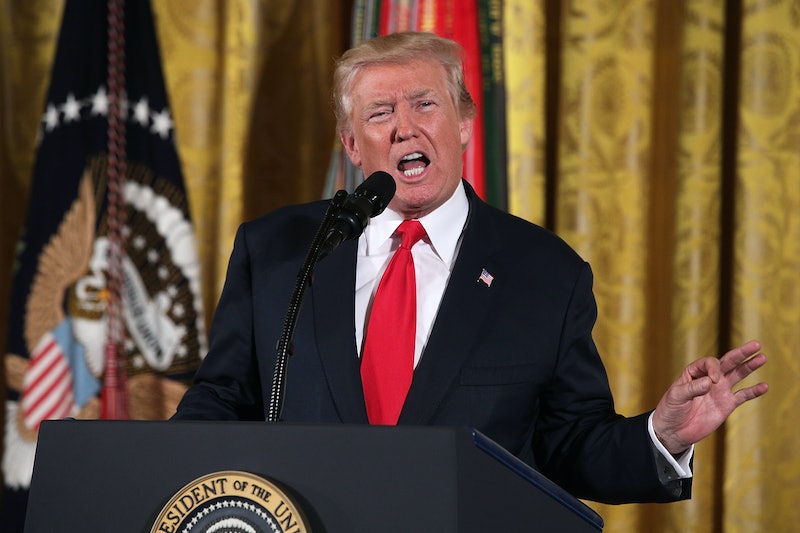 On July 25, President Donald Trump sat down for an Oval Office interview with Gerard Baker, the editor in chief of the Wall Street Journal, and now the full transcript of their conversation has been made public by Politico. Some of the most illuminating windows into Trump's outlook and psychology have come by way of interviews with major newspapers, and this latest one is definitely not short on material. Here are some of the juiciest quotes from Trump's interview with the Wall Street Journal, some of which are fairly mind-blowing.

Suffice to say it hasn't been a smooth or particularly successful young presidency for Trump, who's mostly made policy through executive orders and suffered some high-profile legislative defeats. That is, in addition to the seemingly endless swirl of scandal and controversy that's been surrounding him for years, both as a president and a candidate. He's currently polling at unprecedented low approval ratings too, although his base always seems to hold him steady at around 36-38 percent approval.

In short, especially as a notoriously media-obsessed commander in chief, there are plenty of things Trump might like to get his mind off of by chatting with a reporter. But some of the things he said in his interview with Baker are, well, drawing a more than a little scrutiny.

So we’re going to see. John McCain was a great help, coming in as he did. And so it was something I very much appreciate, and we’ll see what happens. We’re going to know in about two hours.

The interview took place just two days before the GOP's so-called "skinny repeal" health care bill fell through in a dramatic late-night Senate vote. A failure which was made possible by the last-minute defection of Arizona senator John McCain, who Trump had praised just days earlier for voting yes on a motion to bring the repeal bill up for debate.

You know what? I don’t even think of pardons. Here’s why, nobody did anything wrong. Look at Jared, everybody – we do appreciate the editorial – but everybody said Jared Kushner. Jared’s a very private person. He doesn’t get out. I mean, maybe it’s good or maybe it’s bad what I do, but at least people know how I feel. Jared’s this really nice, smart guy, who’d love to see peace in the Middle East and in Israel, OK?

Trump denied widespread reports that he'd been inquiring with his staff about the extent of his presidential pardon powers, telling Baker that "nobody did anything wrong," and heaping some effusive praise on his son-in-law and close adviser, Jared Kushner.

In an aside amid a conversation about Baker and his daughter Ivanka's daughters sharing the first name Arabella, Trump interjected with a seemingly entirely out of place remark about Kushner, calling the 36-year-old businessman, who many Washington insiders regard as effectively the shadow secretary of state, a "good boy."

4. "It Was The Greatest Speech"

That was a standing ovation from the time I walked out to the time I left, and for five minutes after I had already gone. There was no mix. ... And I got a call from the head of the Boy Scouts saying it was the greatest speech that was ever made to them, and they were very thankful. So there was – there was no mix.

In reality, while Trump's controversial speech at the 2017 National Scouts Jamboree last week was clearly well-received by many of the scouts in attendance ― it is a visit from the president, after all ― the head of the Boy Scouts would ultimately apologize for his meandering, bizarre, highly politicized performance. That doesn't necessarily mean that he didn't assure Trump it was the greatest speech ever delivered to the Boy Scouts, sure. But it doesn't exactly help his case.

I think I’m proud of the Supreme Court choice. And that’s not just a nomination, that’s getting him through. I’m very proud of opening up regulations. One of the reasons you see optimism is because people can actually use their land. They can farm their land. I’ve had tremendous and tremendous – look, I had 45,000 people there yesterday. It’s the biggest crowd they’ve ever had, and they were – they were going wild yesterday in West Virginia. But people can actually use their land and they can build.

When asked what accomplishments he was proud of, Trump cited the nomination and confirmation of Supreme Court Justice Neil Gorsuch first, a process in Trump picked a name off a list, and the GOP-controlled Senate abolished the filibuster so that the Democrats had no functional way to affect the outcome.

His second achievement was even less specific. Talking up the size of the crowd at the aforementioned Boy Scout Jamboree, Trump remarked that thanks to him, people can "farm their land."

6. "It's Pretty Amazing How Many People They Have"

You know, a lot of people say – they say, well, but the United States is large. And then you call places like Malaysia, Indonesia, and you say, you know, how many people do you have? And it’s pretty amazing how many people they have. So China’s going to be at 7 or 8 percent, and they have a billion-five, right? So we should do really well.

While ostensibly answering a question about his plans for tax reform, Trump digressed into discussing how he likes to call other world leaders and ask them how many people live in their countries. This is all information that's a single web search away, of course, but by Trump's own claim, he prefers to get the information straight from the source.

You know, I was with Bob Kraft the other night. He came to have dinner with me. He’s a friend of mine. And as he left, he said, Donald, don’t worry about the rich people. Tax the rich people. You got to take care of the people in the country. It was a very interesting statement. I feel the same way.

Trump dropped a passing reference to taxing the rich into the interview, referencing an apparent recent dinner he had with New England Patriots owner Robert Kraft. If there's any part of the transcript that made Paul Ryan and the Republican leadership's blood run cold, this would be it ― as many things as they've let Trump slide on, if he starts talking about increasing taxes on the rich, the remaining well of support will be bone-dry in record time.

Of course, Trump seemed more or less completely negligent of his past statements and promises when it came time to craft a health care bill, largely outsourcing the process to Ryan and Senate Majority Leader Mitch McConnell, so there's no particular reason to think tax reform would be any different.

But I’m very happy with Anthony. I think Anthony is going to do amazing.

Remember, this interview was conducted back on July 25, just four days after Anthony Scaramucci was publicly introduced as White House communications director. As it turns out, presumably unbeknownst to him, he was already more than a third of the way through his time in government when Trump gave him this vote of confidence.

No, but I can say that we’re going to be very involved with the U.K. I mean, you don’t hear the word Britain anymore. It’s very interesting. It’s like, nope.

Trump declined to offer any new details on his plans for trade deals with the United Kingdom, but he did offer the above analysis. You just never hear the word Britain these days, right? Like, nope.

All in all, the complete transcript of Trump's interview with the Wall Street Journal has a very similar vibe to the previous major interviews he's done ― full of digressions, distractions, and idle boasts, and light on any direct, articulate evidence of policy knowledge. If you're looking for encouraging signs, however, he didn't attack his own attorney general this time around. That's sort of progress, right?