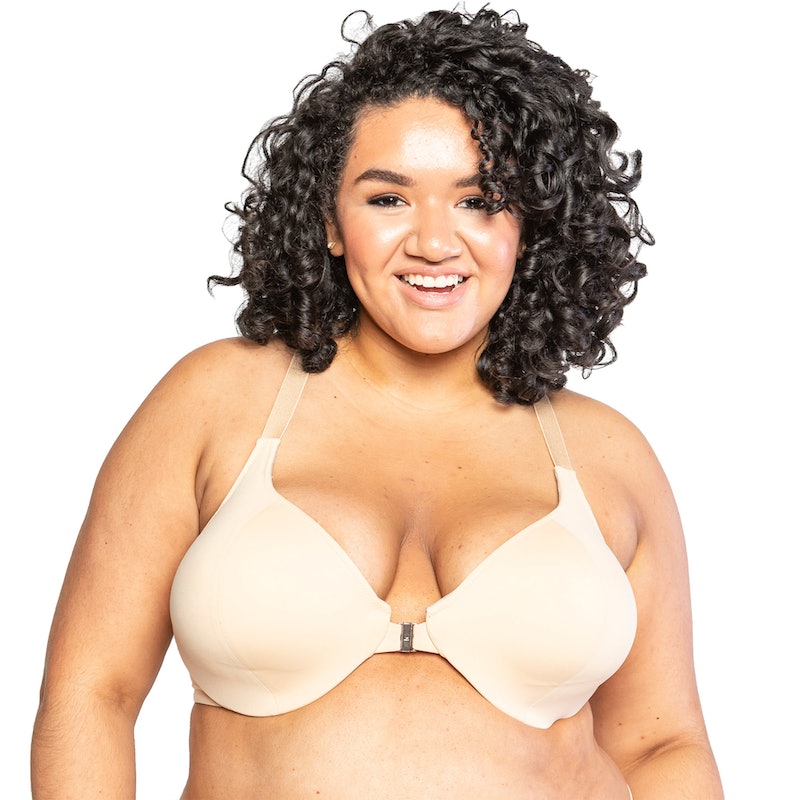 Bra shopping is a lot like any other shopping trip: It's difficult if you're thicker. Bigger busted people don’t always have the same style accommodations as everyone else. However, lingerie brand Trusst makes bras for D cups and up, and is now launching its first front-closure style.

The Trusst brand has been around since 2016 when its founder Sophia Berman realized the need for bras for bigger busts was more common than she previously thought. As an industrial design student, Berman found a way to incorporate 3D printing into the structure of the cups, designing the bra like a bridge with its trusses to lift up the breasts so the shoulders don't carry all the breast weight like more traditional bras. On top of that, the structure of Trusst bras also solves big-breasted issues like boob sweat and chafing.

The brand launched with styles like the Suzanne bra with a moisture-wicking lining to prevent chafing and the Naomi bra featuring a side mesh detail to contain side boob, both of which support 80% of breast weight in the cups. Now, Trusst is launching its new Evie style, after, according to the brand, over 50% of customers requested a front-closure bra.

"We created the Evie front-closure bra based on customer feedback and requests for this style.” Berman tells Bustle. “A front closure style is easier to put on for a wider band, as well as for women who might have shoulder or back issues and have a hard time reaching behind to secure a traditional back bra closure.”

The Evie bra offers the same support in the cups as all of Trusst's other styles. The bra itself features a small brass closure in the front, while the the supportive racerback design holds everything in place, making shoulder dents, boob sweat, back pain, and poking wire a thing of the past.

“With every conversation, I kept hearing over and over that [the customer] was searching for a bra that would actually work for her body,” Berman states on the Trusst website. “A bra that would provide support for her heavy breasts so that she could stop feeling the pain points that even a well-fitting ‘traditional’ bra causes.”

When creating the 3D support system for the debut collection, Berman started with an entire 3D printed bra cup and cut down the plastic structure piece by piece to use as little plastic as possible for maximum amount of support. What the founder ended up with was a small 3D printed under boob shelf with a layer of foam for comfort, and customers approve.

"I have had nagging neck and shoulder pain for years from my chest size," one customer wrote on the Trusst site. "I have been needing to go to the chiropractor and massage therapist regularly to manage my pain. Two weeks of wearing this life-changing bra, my pain is lessening each day!"

"This is a beautiful bra, with the bonus of being comfortable," another review said about the Jessica bra. "It has 5 hooks in the back, so gives wide support. Really, because of the way the breasts are supported, there is no weight on the shoulders."

With the release of the Evie, Trusst reminds big breasted babes that putting on a bra doesn't have to be a cirque du soleil act. But more importantly, Trusst reminds bustier shoppers they haven't been forgotten in a world of bra design.