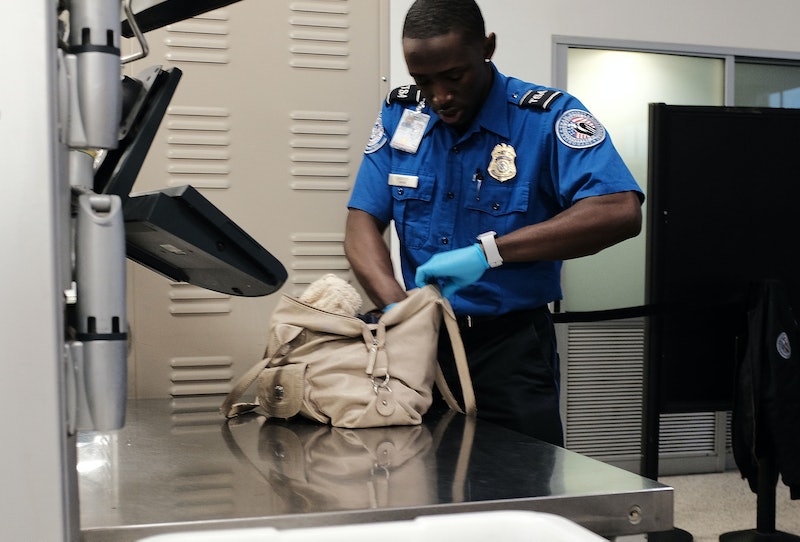 The Transportation Security Administration is one of the federal agencies whose workers are among the 420,000 expected to work without pay during the government shutdown. Now, after working without pay since Dec. 22, hundreds of TSA workers are calling out sick from at least four of the country's major airports, according to CNN.

At least 170 TSA workers called out sick each day this week at John F. Kennedy International Airport in New York, Hydrick Thomas, the president of the national TSA employee union, told CNN. While Dallas-Fort Worth International Airport has seen an increase of sick call outs by 200 to 300 percent, according to the news network.

Union officials told CNN this is not a coordinated effort like a strike — workers are just frustrated. "This problem of call outs is really going to explode over the next week or two when employees miss their first paycheck. TSA officers are telling the union they will find another way to make money. That means calling out to work other jobs," a union official at DFW Airport told CNN.

"Call outs began over the holiday period and have increased, but are causing minimal impact given there are 51,739 employees supporting the screening process," TSA spokesman Michael Bilello said in a statement, according to The Dallas Morning News.

TSA workers are due for their next paycheck on Jan. 11, according to The Dallas Morning News.

One TSA worker who only went by Watts told WNYC (New York City's public radio station) that he's called creditors to try to put off payments. "Some agencies are lenient, like okay, we can let y’all wait to pay us back. But most of the companies want their money up front," Watts told WNYC.

Watts said they expect to be paid back when the shutdown lifts, but it's not clear when that will be. "It's hard, because people have bills to pay. If you got spouses, family, friends that can help you stay aboard until you get your pay, it's really not too harsh," Watts told WNYC. "But everybody is not in that same boat."

Which is why TSA employees have started calling out and may start seeking alternatives, Juan Casarez, president of Local 1250 of the American Federation of Government Employees told The Arizona Republic. "I'm getting calls daily, hourly, from members wondering what to do next," Casarez the newspaper. "If it goes another few weeks, they will have to start thinking of alternatives."

And many TSA employees can't afford to get to the airports, TSA union president Hydrick Thomas told The Washington Post. "They are not coming to work because they don’t have the money to get to work. They're not just taking off," Thomas told the Post. "They're not saying, 'We're going to shut things down.' They are the lowest-paid employees in the federal government, and they don't have the money to get to work."

Thomas told WNYC that the starting salary for a TSA worker is about $17,000. "We don't make that much money. You lose a day's pay, it can have a total effect on how you manage your livelihood," Thomas told WNYC.